Epcot to close two attractions, including one of its most popular thrill rides 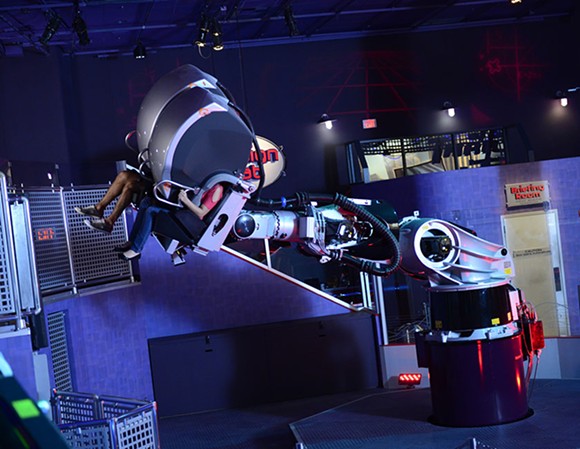 Epcot has a number of rumors regarding updates to Future World, but while rollercoasters and '80s music may be on the horizon,in the meantime, it's more gloom and doom for the community of tomorrow.

Two of the last three remaining exhibits in Innoventions will be closing mid-September.

First on the chopping block is StormStruck, an interactive attraction with various mini-exhibits where guests learn about how to prepare their homes for hurricanes and other storms. Then guests enter into a 3D theater where water misters, industrial and immersive 3D helps simulate a hurricane. The attraction opened in 2008 with few updates over the years. It rarely sees waits of any length these days.

The second attraction inside Innoventions to close is Sum of All Thrills. This thrill ride allows guests to design their ride by selecting different "coaster" sections and themes. Guests can then ride the "coaster" they just designed via a KUKA arm simulator.

Even with four KUKA arm simulators, Sum of All Thrills on busier days can have some of the longest waits in all of Epcot. The ride, while dated by today’s simulator standards, still offers a versatile experience that nearly anyone (48 inches or taller) can enjoy.

Both Sum of All Thrills and StormStruck will close on Sept. 13.

With these two exhibits closing the only attraction left in all of Innoventions is Colortopia; that exhibit opened less than a year ago, but it’s believed it will close sooner than later to make way for a top to bottom update to Innoventions. Innoventions East has seen each of its exhibits close over the past year as sponsorships have expired, just like what happened to West before it completely closed. Innoventions West was closed completely in April 2015 after the last of its exhibits ended their sponsorship deals. Since then, a small part of Innoventions West has been redesigned as a character
meet-and-greet.

Disney hasn’t released any details on what will be replacing Innoventions East or West and the rumor mill has been quite quiet on the subject. In the meantime, Innoventions East will continue to be a great place to cool down in the AC and, you never know, you might even find that perfect paint color for that next project around your house.

The Gist Epcot WDW Innoventions Sum of All Thrills StormStruck