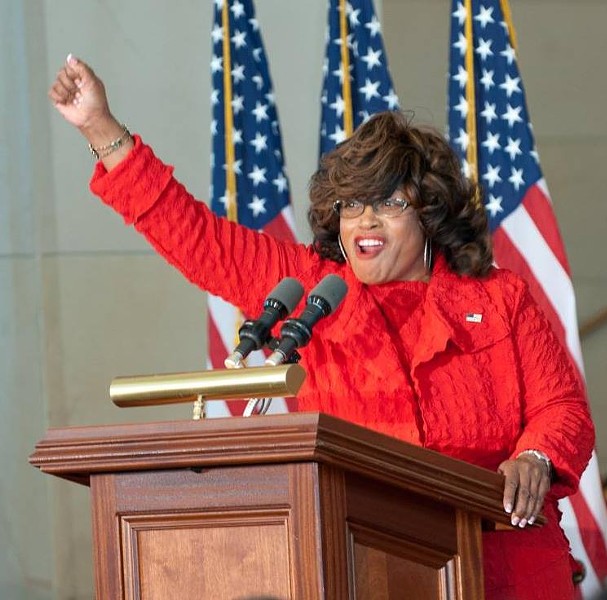 Democratic Congresswoman Corrine Brown lost her bid for re-election Tuesday, bringing a 24-year congressional career to an end amid a federal indictment and changes to the longtime boundaries of her district.

With all precincts reporting, unofficial results showed former state Sen. Al Lawson carrying 47.7 percent of the vote in Congressional District 5, which stretches from Jacksonville in the east to Gadsden County in the west, cutting through Tallahassee along the way. Brown had just shy of 39 percent of the vote, while LaShonda "L.J." Holloway garnered 13.4 percent.

Lawson won six of the eight counties in the district, losing only Brown's longtime power base of Duval County and a small piece of Columbia County. He defeated Brown by more than 7,100 votes.

The incumbent was resigned in comments to local reporters.

"I don't feel bad tonight because I know I've done the best I could," she said, according to Action News Jax, which covers news for CBS and Fox affiliates in Jacksonville.

Brown's loss was a stunning end to a lengthy political career, including a 12-term tenure in Congress that once seemed unassailable. Over more than two decades, she represented her district in a loud and sometimes unpredictable manner, once taking to the House floor in an orange and blue gown to celebrate a national championship by the Florida Gators football team.

But she sensed danger in 2010, when Florida voters approved an amendment to the state Constitution aimed at banning political gerrymandering. Brown's meandering district, which then ran from Jacksonville in the north to Orlando in the south, was often highlighted as a prime example of gerrymandering.

She fought the amendment in federal court and lost and later waged an unsuccessful legal fight against a court-ordered redistricting plan that created the current east-west configuration. Brown insisted that an African-American Democrat could not win the seat, despite the fact that President Barack Obama won it by more than 28 points in 2012. Lawson, who faces Republican Glo Smith in the November general election, also is an African-American.

Brown's path to re-election became more daunting when federal prosecutors in July announced a 22-count indictment saying the congresswoman and others used the "One Door for Education" charity as a slush fund. Brown denied those allegations and accused the prosecutors of timing the charges to help defeat her. She also lashed out at the media for focusing on the accusations.

"You all need to do your job," she said during a debate. "You should not just let someone give you a slip of paper and say, 'This is the case,' and you don't do your fact checks. My work speaks for itself."

On Tuesday, Lawson pointed out to reporters that the indictment seemed to have done little damage to Brown in Duval County, where she won by almost 16,500 votes.

"It appears that the indictment did not hurt her that much in Duval," he said. "A lot of people in Duval still stuck with her. What happened was we were able to carry our message to the other parts of the district."

In the end, it might have been the earlier court battles over redistricting that proved fatal to Brown's once-solid hold on her seat.