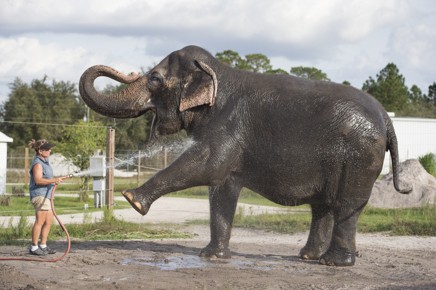 Just as Ringling Brothers and Barnum and Bailey Circus ramps up efforts at its own elephant conservation center, another elephant center, one with direct ties to Disney, closes its doors.

The National Elephant Center in Fellsmere, Florida, was considered the next step in elephant conservation, deemed as both a temporary and permanent sanctuary for elephants.

Disney had strong ties with the National Elephant Center – John Lehnhardt, the former animal care director at Disney’s Animal Kingdom, served as the first executive director for the center. The first elephants at the new center were from Animal Kingdom.

Within a year the first elephant, died after a salmonella infection. Roughly six months later a second death at the center occurred when Tufani’s mother died while giving birth. Her calf died during labor, as well. This death is what put Disney's Animal Kingdom on In Defense of Animals' 2014 list of "10 worst zoos for elephants."

Less than a month after the second death, Lehnhardt retired from the volunteer position of executive director. Another former Animal Kingdom cast member left the center at that time, as well. Scott Krug, also formerly of Disney, became the acting manager at the the Center.

With Juno’s death, the National Elephant Center was left with only two elephants, the two remaining ones from . In November 2015, the Center announced plans to move those two remaining elephants to other locations.

Within a week, both elephants were gone. One returned to the other went to the Jacksonville Zoo (where it now lives out its days with Michael Jackson's former elephant). With the elephants gone, Scott Krug was rehired at Disney, maintaining his license for the National Elephant Center.

Then last month, the Center filed paperwork with the state confirming that it was withdrawing from doing business in Florida.

At one point there was of Ringling bringing its Asian elephants to the center, which only housed African elephants over its lifetime. But after stalled fundraising and other expenses, Ringling eventually decided to
place its entire herd, the largest herd of Asian elephants outside Asia, at
its own conservation center in Polk City.

There’s no word on where Disney plans to send its elephants that can no longer get along in a herd or need a different place to retire. Ringling did speed up plans for its elephant center, allowing for the few remaining elephants on the road to early. There are some unconfirmed rumors that Disney may have helped speed things along at the Ringling Center, run by Ringling parent company Feld Entertainment. Feld and Disney have a long history together with Feld overseeing most of Disney’s traveling arena-style shows, such as Disney on Ice and Marvel Universe Live. Currently, the Ringling facility only houses Ringling elephants.

There’s no word on what will happen at the Fellsmere elephant conservation center, but with continued success at its Polk City facility, Ringling might have yet another new partnership with Disney in the works.