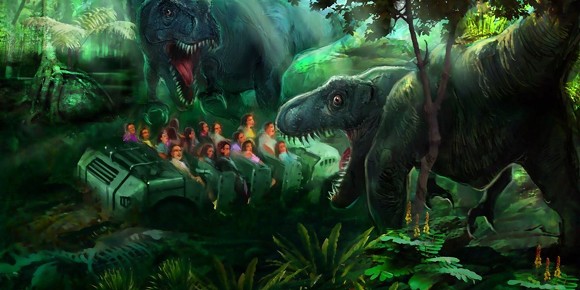 Even as attendance at theme parks here in Orlando is declining, across the globe in Dubai, the ever increasing collection of impressive tourist options is keeping Orlando-based tourism companies busy.

Ilyas & Mustafa Galadari Group (IMG) first discovered Falcon’s Creative Group during a routine scouting trip to an Asia trade fair. The two companies initially planned for a much smaller interaction with each other, but before long, Falcon’s had been given full master planning duties for the project. An entire reworking from early designs took place as IMG secured an impressive line-up of intellectual properties.

Cartoon Network and Marvel are both present in the park, as well as an original dinosaur-themed area plus a central entrance district filled food and retail. The park opened with a whopping 22 attractions (roughly the same amount of attractions as all of Universal Orlando’s two theme parks combined) spread across an indoor area the size of 28 football fields.

“We are looking forward to guests enjoying our designs and media at this one-of-a-kind attraction. It has been a rewarding process to work with the Ilyas and Mustafa Galadari Group and IP providers such as Marvel,” says Cecil D. Magpuri, President and Chief Creative Officer of Falcon’s Creative Group.

Along with master planning, Falcon’s Creative Group was able to design a few of the specific rides for the park including the 3-D "Avengers: Battle of Ultron" ride that can be viewed as an updated version of Universal’s 'The Amazing Adventures of Spider-Man" attraction. Avenger's is just one of the attractions using Falcon’s unique line-up of Orlando tested rides. Next to Avengers sits a Hulk ride that uses Falcon’s circumotion theater, a theater similar to SeaWorld’s "Turtle Trek" (another attraction by Falcon’s) with a motion base attached to it. The theater has been rumored for the Orlando market for a number of years now with its being the ride system of choice with most rumors regarding Star Trek coming to Universal Orlando. The Marvel-themed area also includes an awesome looking high-end restaurants, one even themed to Tony Stark.

Beyond Marvel, the park also includes a Cartoon Network ‘adventure zone’ that includes a Peter Pan style ride that hangs from the ceiling themed to Adventure Time. Just like the Marvel-themed area, the Cartoon Network zone is a mix of off-the-shelf rides, all with highly themed overlays, and unique rides given that extra special Falcon’s touch.

The final area of the park is the entrance plaza known as IMG Boulevard. This main street-style zone does have one unique attraction; a haunted maze similar to those seen at Halloween Horror Nights or Howl-O-Scream open only to guests 15 and older.

The park, while designed with the Middle Eastern visitor in mind, has a uniquely American feel with its various dining, and entertainment offerings.

IMG is now looking to expand its theme park footprint via an IPO set for next year according to Bloomberg. This could mean more work locally for those in the themed entertainment design industry. But nothing has yet to be confirmed on that front, and while there’s plenty of rumors of new parks in the Orlando area few seem to indicate anything to of IMG Worlds of Adventure. Sadly, for now, the only indoor theme park in the works in the region seem to be American Dream Miami, an on-again-off-again megamall planned for Miami. No word on if Falcon’s Creative Group will help with that project.

So, while those in Dubai can enjoy their rides in a comfortable air conditioned setting, here in Orlando just make sure you have plenty of bug spray on before hopping on any rides.