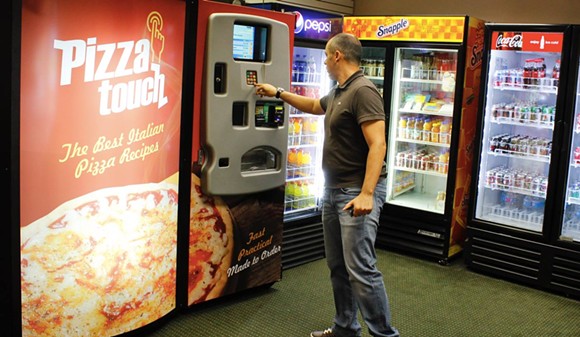 Yesterday Bay News 9 reported that an Italian company, Pizza Touch, had installed three of their vending machines in the state. One is in Lakeland and two are in Orlando.

The machines dispense a small individual pizza in four-cheese, margherita or mushroom-and-pepper variations. Lakeland customer Sunny Mutchler told the News 9 reporter, "It's not bad," after trying pizza with mushrooms and red peppers. "It could use a little more sauce, but it's not bad."

Bungalower reports that one of the two Orlando machines is posted up at the Quality Inn at 7400 Canada Ave., in the I-Drive tourist area, if you want to try this miraculous contraption for yourself. Let us know if you find the second Orlando location; we've had no luck reaching a live person at the company. UPDATED: We spoke with Giselle Sandra of Pizza Touch at 4:30 p.m. today, and she told us a few more things. First, no point looking for that third machine – it's in a building that's not accessible to the public. But within "30 to 90 days," they plan to have about 100 machines operational in the Orlando area, and those machines will, they hope, be smaller than the current prototype.

Check out the machine in action in this Pizza Touch video: