'I am a deplorable,' proudly states Sarasota seafood restaurant owner 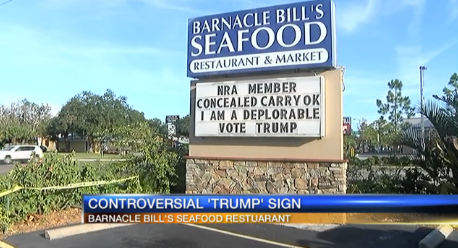 Sarasota seafood restaurant Barnacle Bill's won't be advertising the daily special on their sign for quite a while.

Until the election is over, says restaurant owner William Davis, he's leaving up the message "NRA MEMBER / CONCEALED CARRY OK / I AM A DEPLORABLE / VOTE TRUMP."

Davis posted the political message Tuesday after Hillary Clinton used the phrase "basket of deplorables" to describe half of Trump supporters at a recent fundraiser – something which she later said was "grossly generalistic."

"I got rather upset when I heard that comment from Hillary, and I just felt I had to take a stand and let people know where I stood," says Davis.


In the meantime, the Barnacle Bill's Seafood Facebook page has become a more colorful place.