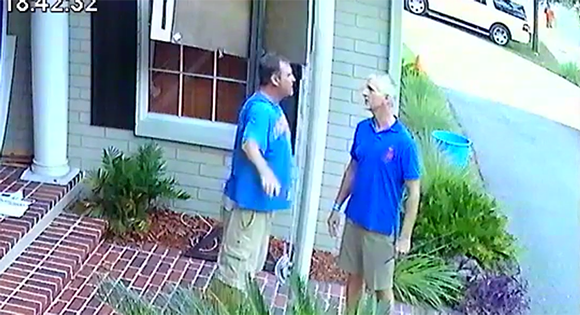 State Rep. Keith Perry, who is running in a high-profile Senate race, met with reporters Thursday to defend his actions in an altercation in which he struck a Gainesville man over the removal of a campaign sign.

Meanwhile, Gainesville police have received a request from the other man in the altercation to withdraw a complaint.

Perry, flanked by his attorney and family at his Senate campaign headquarters, repeated an apology he had emailed a day earlier for getting involved in what he considers a minor incident. He suggested there may be political motivation for the videotaped incident (see video released by Ganesville Police below) to remain unresolved.

"This case has turned bizarre in my opinion," Perry said. "Certain things have happened that just don't add up."

Officer Benjamin Tobias, a Gainesville police spokesman, said in an email Thursday the agency was letting the incident report and the sworn complaint from Norman Robert Leppla speak for itself.

Tobias added that on Thursday, Leppla came into the lobby of the police department to fill out a complaint withdrawal affidavit, which will be forwarded to the State Attorney's Office.

"All I know is I had spit all over my face," Rep. Perry said. "My reaction was an open hand to where that spit was coming from." tweet this
In the incident report, Leppla told police that he was struck with an open hand in the neck by Perry after being confronted by a man and woman as he was taking down political signs on Saturday.

Perry said his daughter spotted a sign being taken down as they drove home from a University of Florida football game and got out to confront Leppla. Perry said Leppla was using the property to park cars for the game and claimed customers didn't like political signs.

Perry said the situation escalated in tone when his wife told Leppla that removing political signs is illegal, with Leppla screaming "vulgar language."

"I tried to move her out of the way, I didn't want her anywhere near this gentlemen," Perry said. "I went back to the porch. He comes out again. He leans in and he spits in my face. My reaction was to push away, which I did, and I wiped the spit off my face."

Perry couldn't verify if the spit was done on purpose or just saliva during a heated discussion.

"All I know is I had spit all over my face," Perry said. "My reaction was an open hand to where that spit was coming from."

In the video released Wednesday by the police department, Leppla can be seen carrying political signs – including one for Perry – onto the porch of a house. Perry approaches and the two men talk, then carry Perry's sign back off the porch. Several minutes later, Leppla re-enters the frame with the sign and puts it back onto the porch. Shortly after that, he begins arguing with Perry, at one point chest-bumping the candidate. Later, Perry forcefully shoved Leppla near the face.

The incident, due to the release of video, has become social-media fodder for Democrats.

Perry called the incident "traumatic" and "humiliating" for his family and campaign.

The sign has been put back up on the property.