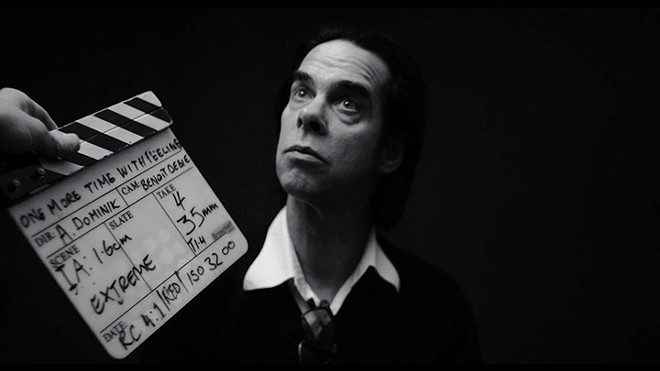 A rather unintentional sequel to 20,000 Days on Earth, the fictionalized Nick Cave biopic, One More Time With Feeling starts out as a modern version of the Beatles' Let It Be, a candid peek behind the curtain into the creative process of the vampiric Cave and his Bad Seeds as they worked on the songs that would become their new album, Skeleton Tree.

So what starts as free-flowing conversations with Cave about the nature of creativity and collaboration (especially his telepathy with ever-present foil, violinist Warren Ellis) mixed with performance footage, shifts into a more raw and painful zone with the emotional atom bomb that was the tragic and accidental death of Cave's son in 2015. Even for the casual viewer, the topic stings – we challenge you not to get teary-eyed when recalling that scene from 20,000 Days of Cave playfully eating pizza and watching Scarface with his sons – and the music takes on an altogether new dimension of sadness, longing and even urgency. Filmed in moody black and white, this is a pitch-perfect encapsulation of Nick Cave, the artist, the musician, the writer and, ironically, if you've ever watched even one second of Birthday Party live footage, the survivor.