Since the Pulse massacre on June 12, the Orlando community has responded in uniquely artistic ways as locals try to honor the 49 victims who died in the attack.

There's no better example of this than "Paint Strong Orlando." Shortly after the mass shooting, local art supply store Sam Flax announced on social media that it would give supplies to anyone who wanted to create a tribute to those lost and injured at the gay nightclub during Latin night. The result: about 260 distinctive pieces from artists of varying skills that evoke the City Beautiful's resiliency on its worst day.

The "Paint Strong Orlando" collection is currently at the Orlando Public Library downtown, and about 200 of the pieces will stay on the first and third floors of the library through October, says Erin Sullivan, spokeswoman for the Orange County Library System. About 70 pieces will be moved to the Orlando Museum of Art this Monday to be featured during Artlando on Oct. 1.

At last week's opening reception for the collection, Sam Flax, owner of the art supply store in Orlando, says putting together the collection has been "absolutely amazing."

"We had no idea what to expect when we put out the offer," he says. "We thought maybe 10, 20 people would respond. We had children bringing in artwork, we had grandmothers bringing in artwork. I don't think this has ever been done before, but it just seemed natural." 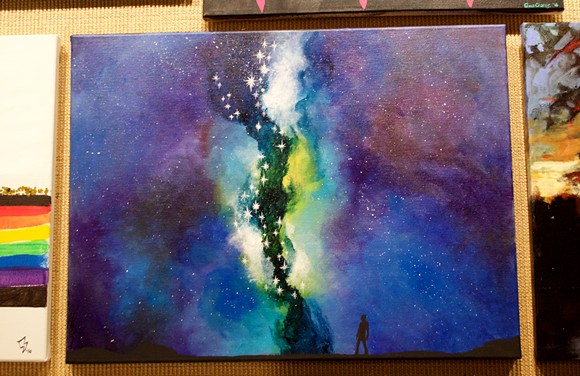 The collection will travel to other places and the individual pieces will ultimately be put for sale, with the proceeds going to charity, though Flax says one person has already offered to buy the entire collection. 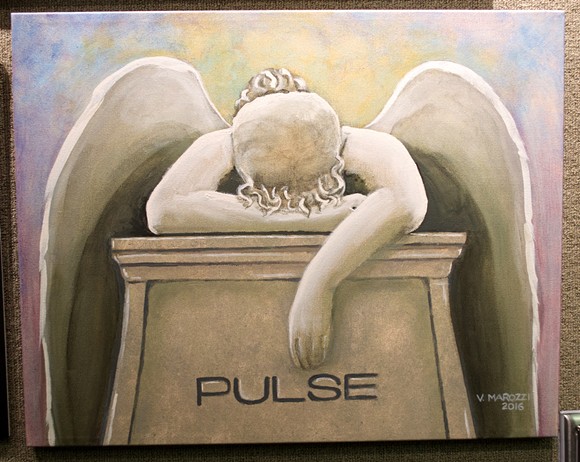 Thalia Soto's piece focuses on Orlando's skyline and includes a brightly colored rainbow, a running theme among many of the pieces submitted. She says she's never really painted before, but seeing news reports about the victims and survivors, she felt compelled to contribute.

"This is my home," she says. "This horrible tragedy brought a lot of people together, and that inspired me so much. I don't see Orlando any different after this. If anything, the City Beautiful is stronger than it ever was."

Chris Hansen crawled out of the Pulse nightclub and helped other survivors get to safety in those early-morning hours on June 12. His favorite piece is the show is "Awaken" by Suheil Acevedo. The painting shows a rainbow stairway to the clouds amid the light from a blue moon.

"I met the artist, and she's colorblind," Hansen says. "She was in a really dark place when she did this. She said she saw me on TV and thought that one day she would meet me."

Hansen says he would like to buy the piece and place it on his wall.

"For me, it says our stairway to heaven is there," he says. "And that even though the souls have moved on, your voice is here to help remember, to help spread the love and to continue."

If you can't see the collection in person, you can look at all of the "Paint Strong Orlando" pieces online here.