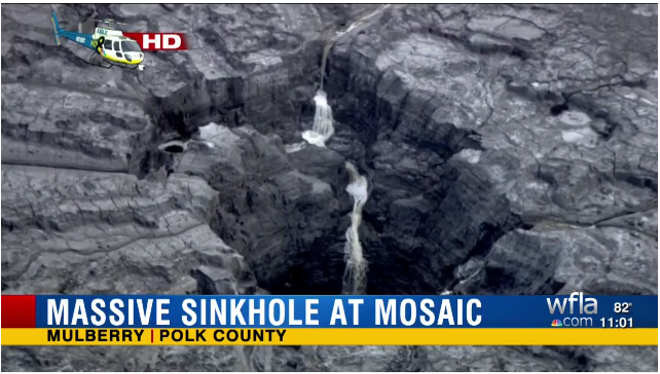 If a massive 300-foot-deep sinkhole ever opens up on a company's property and drains acidic water into your drinking source, don't expect to be notified.

The Tampa Bay Times reports that last month after a sinkhole opened underneath a gypsum stack at Mosaic, a Central Florida phosphate fertilizer plant, neither Mosaic nor three governmental agencies let nearby residents know that the sinkhole was dumping millions of gallons of contaminated water into one of the state’s main underground sources of drinking water, the Floridan aquifer.


A DEP spokeswoman said state law doesn't require the state or the company involved to notify anyone until there's some sign the pollution has migrated outside the property where it went into the aquifer.

"Should there be any indication of offsite migration of contaminated groundwater, rules require the notification of affected parties," the DEP's Dee Ann Miller said in an email to the Tampa Bay Times. "However, to date there is no evidence of offsite movement or threat to offsite groundwater supplies."

Seventy of Mosaic's neighbors requested the free, third-party well tests the company is offering. The company is also giving out free bottled water.

A Mosaic spokesperson says their analysis shows the contaminated water has not moved offsite. The Times reports Mosaic is using a recovery well to pump thousands of gallons of water from the aquifer back to the surface in an effort to recover contaminants.