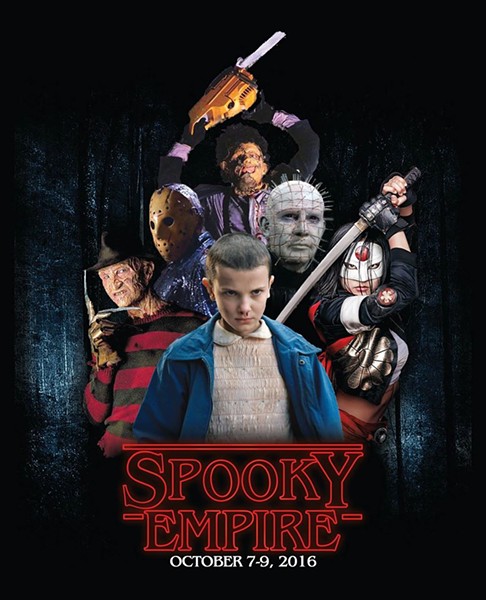 Spooky Empire's transition to a full-blown convention center-style con has resulted in a lineup of media guests that's remarkably strong. One of their major coups has been the number of stars from the Netflix sensation Stranger Things, the homage to '80s horror and sci-fi that took over everyone's newsfeed this summer. With the announcement today that Finn Wolfhard (Mike Wheeler) signed on for an appearance at Spooky, nearly the whole main cast (plus Barb) have been confirmed, so we're hoping that a Stranger Things panel is announced soon. The only major names from the show left for Spooky Empire to announce would be Winona Ryder (Joyce Byers) and Matthew Modine (Dr. Brenner), which would be pretty major additions to the current lineup of David Harbour (Jim Hopper), Millie Bobby Brown (Eleven), Gaten Matarazzo (Dustin Henderson), Caleb McLaughlin (Lucas Sinclair), Natalia Dyer (Nancy Wheeler), Joe Chrest (Ted Wheeler) and Shannon Purser (Barb).

Spooky Empire takes place at the Orange County Convention Center over the weekend of Oct. 7-9. Tickets and VIP packages are still on sale.