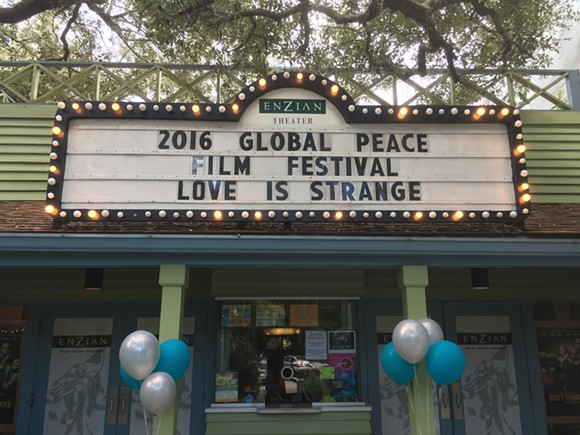 About 150 patrons attended the film and Eden Bar after-party. Though none of the film’s stars attended, Lithgow addressed the audience via a brief filmed introduction.

The festival, which runs through Sunday at several venues in Orlando and Winter Park, officially opened on Monday with an art exhibit at City Hall, but Tuesday night marked the launch of this year’s film lineup, which includes many movies with LGBT themes. Though Love Is Strange is just as much about family and loss as LGBT issues, it poignantly tackles the topic of gay marriage, especially as it relates to job discrimination.

In addition to the films, the festival is noteworthy for discussion panels and directors who will be attending screenings of their films, including Vicki Nantz for We Are Gay, We Are Proud, We Are Orlando, Tami Gold and David Pavlosky for Puzzles: When Hate Came to Town, Kathlyn Horan for The If Project, Mitra Sen for Under the Same Sun, Francisco Alarcon for The Deportation of Innocence, Cecilia Aldarondo for Memories of a Penitent Heart, Robert Frye for The Nuclear Requiem, Kim Snyder for Newtown and Full Sail graduate Famor Botero for ProjectMAD.