City releases transcripts of 911 calls between Pulse gunman and negotiator

The City of Orlando released transcripts of 911 calls between Pulse nightclub gunman Omar Mateen and a crisis negotiator in the early morning hours of June 12 as police figured out how to rescue hostages.

The first 911 call came in at 2:35 a.m., about 30 minutes after the shooting first began at the gay nightclub during Latin Night. Mateen calls 911 and pledges allegiance to ISIS leader Abu Bakr al-Baghdadi.

The first negotiation call at 2:48 a.m. comes from an Orlando Police negotiator to Mateen. When the negotiator asks for his name, Mateen says he's the person who pledged allegiance to ISIS. 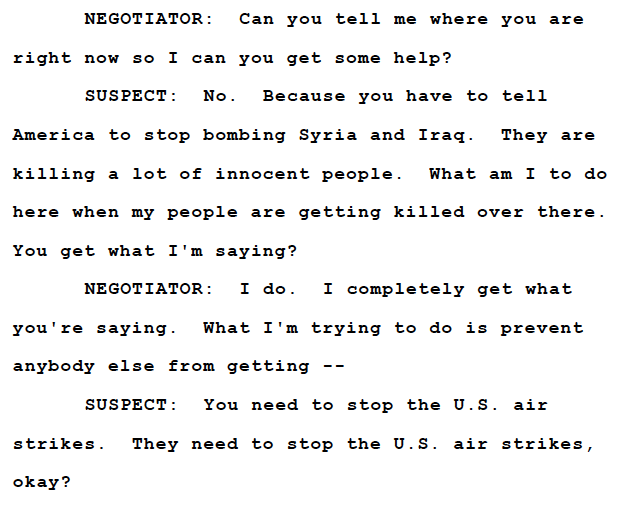 Mateen continues to insist to the negotiator that the U.S. government needs to stop bombing because they are killing too many children and women. "I feel the pain of the people getting killed in Syria and Iraq," the shooter tells the negotiator.

"Look, I'm trying to figure out how to keep you safe and how to get this resolved peacefully because I'm not a politician," the negotiator tells Mateen. "I'm not a government. All I can do is help individuals and I want to start with helping you."

That's when Mateen tells the Orlando Police negotiator that there are vehicles outside with bombs that can take out a whole city block. "Your people are going to get it and I'm going to ignite it if they try to do anything stupid," he says. Mateen then likens himself to another terrorist, saying, "My homeboy Tamerlan Tsarnaev did his thing on the Boston Marathon. My homeboy [unidentified name] did his thing, OK, so now it's my turn, OK?"

The transcripts show Mateen telling the negotiator it's the last month of Ramadan, an Islamic holiday, and that he fasted the whole day and prayed. The gunman says he's wearing a vest like the one used in France, then later says it's a wedding vest. After a small back-and-forth about the vest, Mateen stops talking and leaves the negotiator speaking alone. 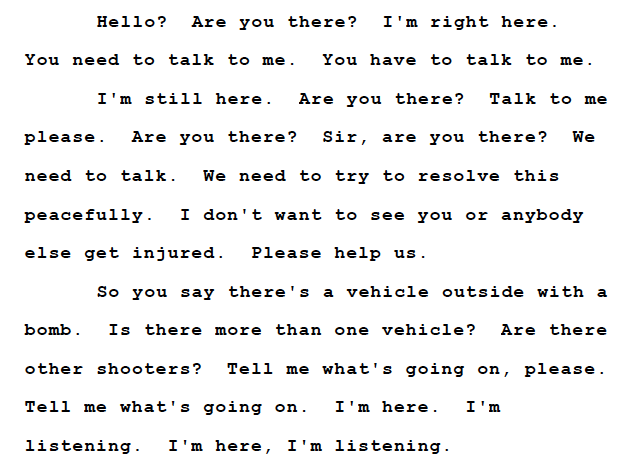 The negotiator unsuccessfully tries to convince Mateen to come outside while Mateen tries asking him when he graduated from the police academy. After Mateen drops the first call, the negotiator calls him back several times, but Mateen stops talking shortly after he answers.

In the last series of calls, the negotiator asks Mateen why it took so long to get hold of him, to which Mateen replies, "You're annoying me with these phone calls, and I don't really appreciate it."

The negotiator tries to tell Mateen they need to stay in contact. 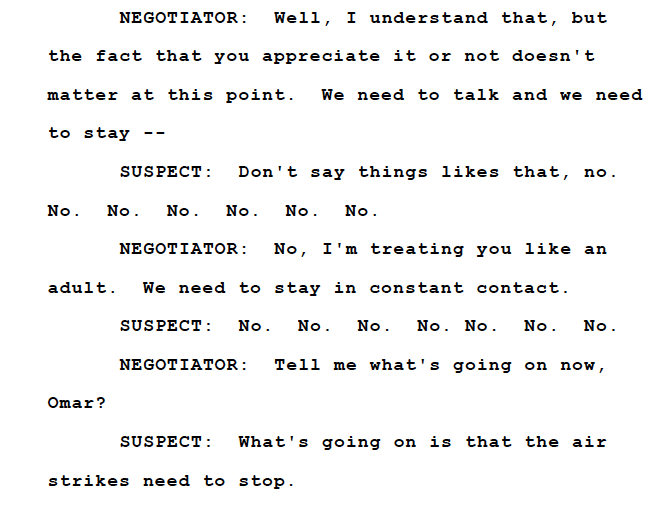 Mateen tells the negotiator, "They need to stop killing people."

"I've heard that and I want you to come outside and tell us that yourself so the message rings true from you without me passing along your message," the negotiator tells Mateen. "I'm doing that, but I need you to come outside with no weapons. Omar?"

The line goes dead at 3:25 a.m. after roughly 28 minutes of phone conversations between the negotiator and Mateen.

The city did not release the audio of these calls and is currently in a legal battle with media organizations to release all the 911 calls made on the day 49 people died and 53 others were injured. Orlando Weekly is not a party to that lawsuit. Read the full transcripts in the attachments below.