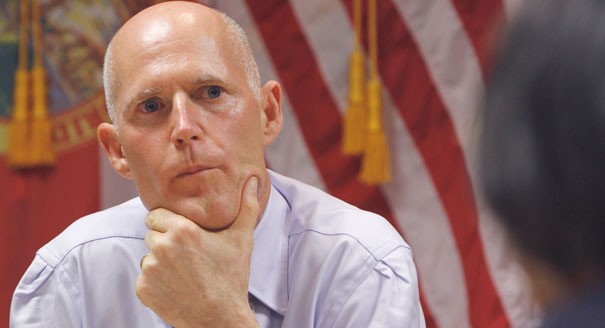 It was a simple, two-paragraph letter from Judge Robert Benton II to Gov. Rick Scott a little more than a year ago that marked a milestone in Benton's life and in the course of one of the most important courts in Florida.

"God willing," Benton wrote at the end, "on January 16, 2016, I will attain the age of seventy years and so become ineligible ... to continue to serve as a judge, except upon temporary assignment."

And with that, the last Democratic appointee on Florida's 1st District Court of Appeal – who was appointed to the court by Gov. Lawton Chiles in 1994 – set in motion the process for a Republican governor to select his successor.

For that successor, Scott turned to Allen Winsor, the solicitor general for Attorney General Pam Bondi. If the 39-year-old Winsor serves until the mandatory retirement age that Benton reached, he will have spent three decades on the bench.

As speculation turns to Scott's first Florida Supreme Court appointment, with the upcoming retirement of Justice James E.C. Perry, a more dramatic makeover of the state's judiciary system has gone almost unnoticed. All of the state's five district courts of appeal now have Republican-appointed majorities. Three have benches that are entirely comprised of judges named by governors who were elected as Republicans. (Gov. Charlie Crist appointed Judge Kevin Emas to the 3rd District Court of Appeal after bolting the GOP late in his term.)

Scott alone has appointed nine of the 15 judges on the 1st District Court of Appeal, which is based in Tallahassee and hears most of the cases challenging the authority of the governor and the Legislature.

And with his choices, Scott has at times overtly attempted to shape a more conservative bench – aided, critics say, by changes to the process for naming judges approved during Gov. Jeb Bush's time in office – and will leave a judicial legacy that far outlasts his tenure. Even if Perry's replacement is the only justice the current governor installs on the Supreme Court, Scott's legal legacy could be in place for a generation.

'THE RULE OF LAW'

It was, perhaps, a rookie mistake. In February 2011, a little more than a month after he had been sworn in as governor, Scott made his first appeals-court appointment. He tapped Burton Conner to serve on the 4th District Court of Appeal, which includes Broward, Indian River, Martin, Okeechobee, Palm Beach and St. Lucie counties.

"Judge Conner represents the values and judicial conservatism I am looking for in our judges," Scott said in a statement announcing the appointment. "He has a great reputation in the community and a great law-and-order demeanor. Primarily a criminal court judge for most of the past 15 years, he has demonstrated a judicial philosophy that makes him unlikely to overstep the role of the judiciary."

Some in the legal community were taken aback by Scott's explanation for why he chose Conner.

"What it says to me is, the governor has an agenda with judges. It's unsettling," former Judge Gary Farmer, whose exit created the vacancy, told the Palm Beach Post. Farmer's criticism was not about Conner, whom he recommended, but Scott's mentioning the new judge's political bent.

Scott would rarely again so bluntly link his judicial appointments to a particular philosophy. But he would use phrases popular in conservative legal circles, referring again and again to "the rule of law," judicial restraint and a judge understanding the proper role of the branches of government.

For example, in 10 of the 22 statements about judicial appointments following Conner that can still be found on Scott's website, the governor uses the phrase "rule of law" in lauding his choice.

Few attorneys, especially those who go before appellate courts, are willing to publicly discuss the political leanings of judges. But some, particularly among those whose areas of expertise might not be in favor with the current governor, privately concede that there has been a shift in the direction of the district courts of appeal, some of it preceding Scott.

Those attorneys' complaints sometimes come around to the Federalist Society, a prominent conservative legal group that formed in the 1980s. The Federalist Society mentions "the rule of law" in its statement of purpose. The group also believes judges should "say what the law is, not what it should be" – an almost verbatim echo of Scott's comment in 2011 about 1st District Court of Appeal Judge Stephanie Ray, who Scott described as committed to making sure "judges say what the law is, rather than what it should be."

Six of the judges Scott has named to appellate courts since taking office either list themselves as members of the Federalist Society or have been on the agenda to appear before one of the first two annual conferences of the Florida chapters of the society. Two of the rumored names for Scott's choice on the Supreme Court – 5th District Court of Appeal Judge Wendy Berger and attorney Dan Gerber – have appeared at one of those events.

There are also suggestions that Scott only appoints certain kinds of attorneys or judges to the appellate courts. Attorneys for plaintiffs, particularly those in personal-injury cases that many Republicans scorn, have come to believe that it's pointless to apply for appellate-court positions or spots on the panels that nominate judges.

The courts now also feature fewer lawyers who have represented individual clients, critics say, and more who were prosecutors and government lawyers, or represented institutions or corporations at large law firms.

That can be as much or even more of an issue than the political balance of the courts, lawyers say, because it has more far-reaching effects than the few, highly publicized blockbuster cases on polarizing issues.

RULES OF THE GAME

Scott would hardly be the first chief executive to try to install judges with similar judicial philosophies to his own, nor would he be the first to fill the courts with young appointees. The last of the Supreme Court justices chosen by Chiles, who died near the end of his term in 1998, won't rotate off the bench until 2018.

However, the power of Scott, Crist and Bush to shape the courts has been enhanced by a change made to the selection process during Bush's tenure. That measure reshaped the judicial nominating commissions responsible for forwarding potential nominees to the governor.

Initially, under the "merit retention" system that Florida adopted after a series of scandals rocked the Supreme Court in the 1970s, the governor chose three members of each judicial nominating commission. The Florida Bar chose three more and an additional three members were chosen by those appointees.

After the Bush-era changes, though, the governor essentially names all nine members of the nominating commissions – five of his choice, and four from lists submitted by The Florida Bar.

"Now, we're getting younger people (appointed as judges) who have more of a political philosophy than those who went up on merit," said Greg Barnhart, of the law firm Searcy, Denney, Scarola, Barnhart & Shipley.

The 22 judges whose ages were listed in Scott's appointment announcements were, on average, just past their 49th birthday when Scott installed them on the bench. That would allow them to serve for almost 21 years before reaching age 70. At 39, Winsor was the youngest.

Others are less certain that damage has been done by the changes to the judicial nominating commissions. Drew Lanier, a political-science professor at the University of Central Florida, co-wrote a journal article in 2001 arguing that under Bush's change, "the independence of the state's judiciary has been implicitly whittled down."

Now, he's more sanguine, despite ongoing attempts by the Legislature to change how the judiciary is chosen.

"Nonetheless, I think the courts have stood pretty independent from those forces," Lanier said.

Dorothy Easley, a past chair of the Appellate Practice Section of the Florida Bar, said most judges at the appellate courts appear to be making decisions based on the law, not the governor who appoints them.

"The real issue is whether qualified jurists are being appointed by this governor, and whether I agree or disagree with his politics, I think the answer is 'yes,' " Easley said.

One court has so far remained out of reach for Scott and other Republicans: the highest one in the state. But the twilight hour for a relatively liberal majority could be fading in that court as well.

Quince was a joint appointment, of sorts, between Bush and Chiles in the waning days of the Democrat's time as governor. In 2006, the Supreme Court issued an advisory opinion saying that the judicial nominating process can begin under the old governor even though a vacancy doesn't technically occur until the outgoing justice's term expires. Lewis, Pariente and Quince's terms will expire on the same day a new governor takes office in January 2019.

Saying the situation was still ambiguous, Republicans pushed a proposed constitutional amendment in 2014 that would have allowed the outgoing governor to pick replacement in such situations. It was defeated. That could lead to another conflict in 2018 if Scott decides to press the issue and seek to make the appointments.

In the meantime, the Supreme Court has repeatedly pushed back against measures approved by Scott and the Legislature, now often doing so by reversing decisions reached by appellate courts. The Supreme Court repeatedly rebuked the Legislature's redistricting plans following the 2010 U.S. Census, leading to sweeping changes in the districts for Florida's congressional delegation and the state Senate. But Scott and the Legislature have also won favorable rulings on issues like a change that required state employees to pay into their own retirement plans – contrary to a trial court's ruling in that case.

Scott has laid out only general principles so far in what will guide him in his decision-making about appointing a successor to Perry.

Barnhart said the proof will be in who Scott names. The conservative members of the current court have been respected legal minds, he said. But a young nominee with connections would send a different message.

Lanier said the current court was acting independently, balancing rulings against the GOP majority in some areas with others in its favor. He conceded that Scott's upcoming appointment gives the governor the opportunity to alter that balance slightly.

"He's not going to change it all that much," Lanier said.