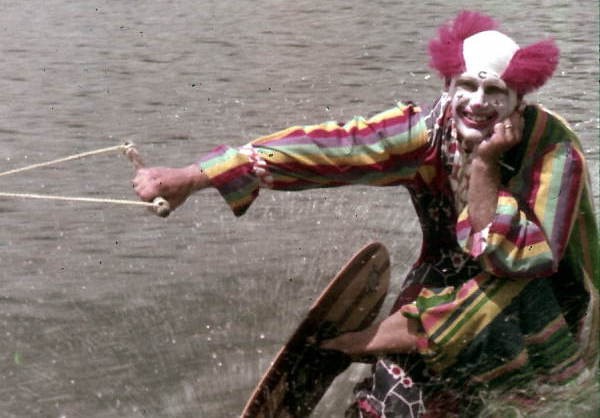 A Brevard County woman walking her dog was faced with her deepest of fears – clowns: the really creepy kind – on Sunday evening, according to Florida Today.

Kelly Reynolds, 41, was walking her pit bull in a Palm Bay neighborhood around 7:30 p.m., when she noticed her dog growling in the direction of the railroad tracks.

Reynolds told Florida Today that she looked toward a wooded area near a park and was startled. “I saw them … two clowns just sitting there staring at me.” Not typically a runner, Reynolds' fight-or-flight instinct kicked in and before she knew it she was at home, calling the police.

According to official reports, police issued an alert to surrounding agencies and searched the woods and railroad tracks near U.S. 1 where Reynolds had first spotted the clowns.

The clowns were described by Reynolds as wearing "hobo-style clothes" (a skull cap and gloves with the fingertips cut off) with white make-up and "blood" on their faces, according to My News 13.

No clowns were found in the search.

On #WFTVat4: Creepy Clowns spotted at #PalmBay park by local woman. She says, "It's time to stop!" pic.twitter.com/D4h11vSV44


Reynolds is unsettled by the sighting and does not find it a laughing matter, considering their chosen location is a park that is normally filled with children. “They come after school and play, and now you can’t trust anything,” Reynolds told My News 13.

This sighting is just one of a larger trend occurring in the U.S. Clown sightings have been reported in Alabama, Georgia, Maryland, North Carolina and Kentucky. Earlier in the week, we reported a sighting in Ocala.

Florida Today reported police are warning those affected and the alleged clowns about the dangers with stunts such as these. “The problem is that someone dressed like a clown could scare someone and there’s a possibility, you could end up with someone getting shot,” said Lt. Mike Bandish of the Palm Bay Police Department.