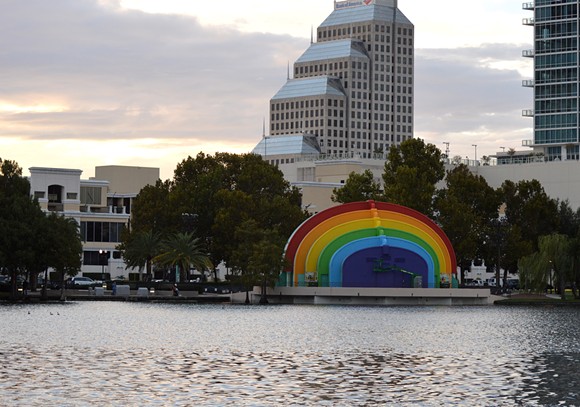 The Lake Eola Bandshell has been given the rainbow treatment to honor the lives of the 49 people lost in the mass shooting at the gay nightclub Pulse this past summer.

In a press release, Orlando city officials say Deborah and Lauren Jane Gilmore proposed the idea to Orlando commissioners along with a watercolor rendering by Lauren Gilmore. Each color has a different meaning, according to the Gilmores: "Red for love; Orange for Orange County; Yellow is faith and hope; Green for life, its fragility and renewal; Blue for the sadness we all collectively feel and to honor our police officers and medical staff; and Purple representing valor and bravery," the press release says.

City Commissioner Patty Sheehan coordinated with community partners to paint the bandshell, also known as the Walt Disney Amphitheater, like the illustration before the Come Out With Pride Orlando parade on Oct. 8.

"This is a shining example of community collaboration," Sheehan says in a statement. "This started as an idea from a resident and we approached Walt Disney World who was able to make it happen in time for our Come Out With Pride celebration. We are grateful for Disney’s generosity, making this remembrance of the victims with a symbol of hope for our community now and in the future."