Sales, if you recall, is a seriously rising Orlando buzz band that – underneath all the fog of internet hype – are debatable. The promise is that this indie-pop duo has some alluring songs. The rub is that they’ve always been more of a studio flower than a live tree. They’re an act that’s shown enough hope and spark to truly root for. But with such a minimal arrangement that lacks the finishing live touches of like, say, the xx, they just never satisfied onstage.

However, the prospect of a new member – a drummer – was intriguing as a possible missing link between Sales’ mystique and their reality. Well, the debut of this expanded roster (Oct. 4, The Social) was the answer to not only the question of what Sales could be but to the prayer of what Sales should be. With Singer Lauren Morgan’s lovely singing, their music has always had heart.

But with this simple but necessary addition, their live performance finally has pulse. Now they’re running on an instrumental chassis that, instead of being a distracting lapse, is at last suitable for translation on stage.

Sales have built enough momentum and cachet to register nationally and draw impressively at home, as their national-level draw at this latest show proves. It’s only now, though, that they’re finally getting serious. This could get big time.

Backed by a credentialed cast of live players that includes Ranson Vorpahl (drums), Tré Hester (bass) and Kendrick Leighton (guitar), this act is also rap-based but is expanded with a pimp-smooth foundation of R&B and funk. As Mr. 3, Morall was a literate and hilarious pop-cultural assassin. But as Fiona, his famous showmanship instead comes on like a lion of chill swag. 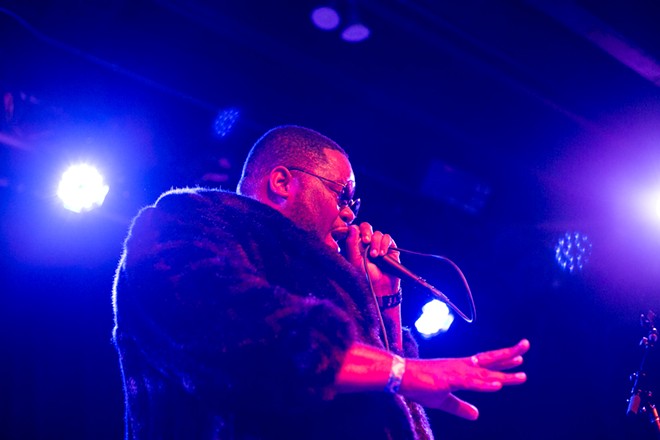 Trust me – and his black fur coat, and his black shades, and his medallion – on this. It’s a legit progression for one of the city’s most original voices. And because it demolishes the usual wall between rappers and bands, Fiona is maybe the freshest addition to the live scene in some time.