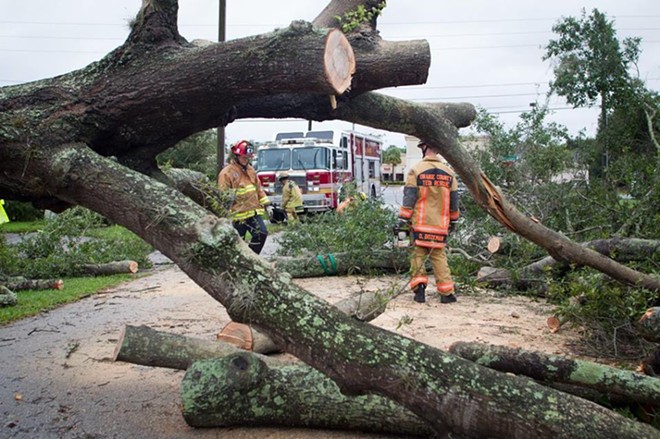 Hurricane Matthew killed at least four residents and left some 1.2 million homes and businesses without power, as the storm began moving away from the state's northeastern coast on Friday evening.

In a visit to the Volusia County emergency operations center, Gov. Rick Scott said he was still worried about the impact of flooding and storm surges in the Jacksonville area from the Category 2 storm, whose center was some 40 east of Jacksonville Beach early Friday evening.

"We are very concerned about storm surge," Scott said, adding that he has been in constant contact with Jacksonville Mayor Lenny Curry about the situation. He said the state would try to use pumps to relieve the threat once the high winds subside in the Duval County area.

Volusia emergency officials reported the death of a woman killed by a falling tree during the hurricane. The Putnam County Sheriff's Office reported the death of a woman who was killed when a tree crushed a camper trailer. St. Lucie County officials reported two hurricane-related deaths, when emergency crews were unable to reach a 58-year-old woman and a man in his 80s, both of whom died from medical complications.

As of early Friday evening, about 1.2 million Florida homes and businesses were without electric power, according to data compiled by the governor's office. More than one in 10 Florida electric customers were unable to turn on their lights, run their air-conditioners or keep food refrigerated as a result of the hurricane.

There was a 92 percent outage in Volusia County, where 258,000 customers were without power.

There were 196,000 customers without power, representing a 47 percent outage, in Duval County, according to the Jacksonville Electric Authority.

Another 197,000 homes and businesses in Brevard County were without power, representing a 64 percent outage.

But there were also signs of Florida returning to normality after an extensive coastal brush with a storm that approached the state as a powerful Category 4 hurricane with 140 mph winds.

Walt Disney World and Universal Orlando, which shut down, were scheduled to reopen for normal operation hoursÂ on Saturday.

The Orlando International Airport, which handles some 900 flights a day and had been closed since Thursday evening, was also scheduled to reopen Saturday morning.

Scott, who toured hurricane damage in Brevard County on Friday afternoon, said state and local officials were working to restore coastal communities that had been hardest hit by the storm, including having the Florida Department of Transportation inspect bridges to ensure their safety.

"As the storm passes north, we're getting DOT to focus on the bridge assessments so people can get back to their communities," Scott said.

But Scott also said the state still had more than 180 emergency shelters open on Friday, with 23,800 people staying there.

As part of the state's response to the storm, Scott earlier FridayÂ said he will continue to push for food, water, tarps, generators, water pumps, search and rescue teams, hazmat assessment teams, cots, blankets, food distribution vehicles and helicopters from the federal government.

"For our local communities that need more resources, we will continue to make more requests as needed," Scott said at the state Emergency Operations Center.

A day earlier, President Barack Obama signed an order to coordinate supplies and equipment for Florida in advance of Hurricane Matthew.

The Federal Emergency Management Agency announced FridayÂ afternoon that 10 urban search and rescue task force teams have been sent to Florida and Georgia. The federal agency also reported that more than 476,000 liters of water, 536,000 meals, 25,000 blankets and 20,000 cots were ready to be deployed.

As part of the post-storm recovery, no issues were found from an inspection of the 143-mile-long Herbert Hoover Dike surrounding Lake Okeechobee, the U.S. Army Corps of Engineers announced Friday.

However, with the water level up to 15.9 feet, more detailed inspections were underway.

"Our initial reports indicate the dike has weathered the storm well," said Col. Jason Kirk, Jacksonville district commander, in a release. "However, we want to conduct more thorough inspections to identify any issues as early as possible."

Meanwhile, "as much water as practical" is again being released from the lake towards the Caloosahatchee and St. Lucie estuaries, a process that drew concerns last summer over toxic discharges.

Water managers had estimated that the storm could push the lake up to 16.5 feet, which would be the highest in a decade.

"We anticipate inflows to the lake will increase as a result of Hurricane Matthew," said Kirk. "Therefore, we must maximize outflows in order to slow the rise in the lake and be as prepared as possible for additional hurricane season uncertainty."

Scott saidÂ ThursdayÂ that concerns have been expressed about the state of the dike, particularly as forecast tracks show Matthew could swing back to South Florida next week as a depression or tropical storm.

"It's too early to say whether that occurs with this event, but it is something we will continue to monitor," said Corps spokesman John Campbell.