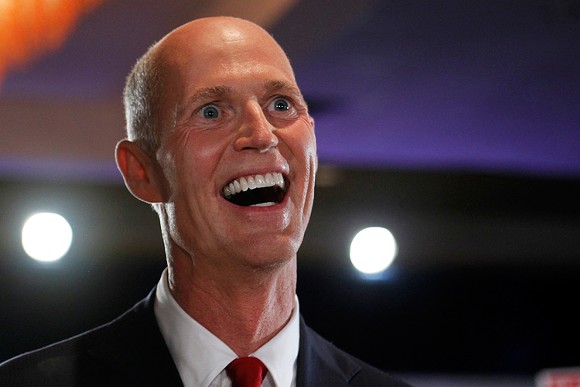 While thanking Scott for his leadership in preparing the state to handle Hurricane Matthew, the lawmakers said Floridians have been focused on dealing with the storm, which approached the state as a potentially devastating Category 4 hurricane, and its aftermath. "As a result, it will be logistically challenging and likely impossible for many who would like to register to vote to be able to do so before the impending deadline on Oct. 11," the members of Congress wrote, asking Scott to extend the deadline until at least the following Friday.

"It goes without saying that our democracy is stronger when more people vote. ... As elected officials, we must do all that we can to keep our citizens safe as well as safeguard the freedom of every individual to elect their representatives, from the state House to the White House."

Scott, who is chairman of a super-PAC backing GOP presidential nominee Donald Trump, on Friday reiterated his decision not to extend the deadline.

"Everybody has had a lot of time to register," Scott said Thursday. (No matter how sure you are that your registration is in order, please take a moment to check it at registration.elections.myflorida.com. Your last chance to make any corrections is Tuesday, Oct. 11.)

Democratic presidential nominee Hillary Clinton's campaign had asked Scott to extend the voter registration deadline in a state that could play a pivotal role in the election. On Friday, Howard Simon, head of the American Civil Liberties Union of Florida, also asked for an extension. Simon noted that Nikki Haley, the Republican governor of South Carolina, had used her emergency powers to extend the state's voter registration period because of Hurricane Matthew.

"This is a simple, non-partisan request for the governor to use his authority to ensure that every eligible voter has the opportunity to participate in this important election," Simon said. "Preparing our state for a natural disaster and enabling full and fair participation in our democratic process aren't mutually exclusive — in fact, they should go hand in hand."

Simon also noted that some 50,000 Floridians registered to vote in the final days before the registration deadline for the 2012 presidential election.