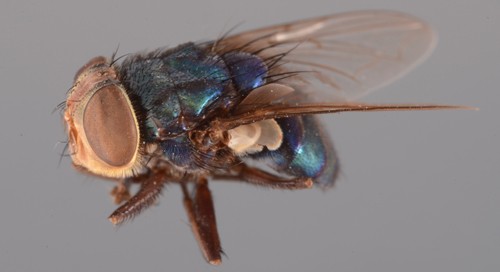 Just when you thought you'd figured out all the ways Florida could kill you, our creepy state decides to add another!

The U.S. Department of Agriculture confirmed earlier this month the presence of New World screwworms in Key deer living at the National Key Deer Refuge in the Florida Keys, which doesn't sound that terrifying until you learn why they're called screwworms. Adult screwworms, which look like regular flies, lay their eggs in the open wounds of warm-blooded creatures (including humans, though cases are rare). When the eggs hatch, the larvae burrow and corkscrew their way into the host's flesh, eating it as they go.

The screwworm infestation in the Key deer is the first local infestation in the U.S. in more than 30 years. Florida Agriculture Commissioner Adam Putnam declared an agricultural state of emergency because of the infestation in Key deer and a few pets in the Big Pine Key and No Name Key area. The Miami Herald reported earlier in October that more than 40 of the nearly 1,000 endangered Key deer have been euthanized due to screwworms.

"The screwworm is a potentially devastating animal disease that sends shivers down every rancher's spine," Putnam says in a statement. "It's been more than five decades since the screwworm last infested Florida, and I've grown up hearing the horror stories from the last occurrence. This foreign animal disease poses a grave threat to wildlife, livestock and domestic pets in Florida."

State and federal officials are working to address the issue through fly trapping to determine how bad the current infestation is and by releasing sterile male flies to eliminate the population. Florida agriculture officials also established an animal health-check zone in the Florida Keys that screens all animals traveling north of Mile Marker 106.

"We've eradicated this from Florida before, and we'll do it again," Putnam says. "We will work with our partners on the federal, state and local level to protect our residents, animals and wildlife by eliminating the screwworm from Florida. The public's assistance is crucial to the success of this eradication program."