New LOVE mural goes up across from Pulse site

A new mural is going up across the street from the gay nightclub Pulse on a wall of the Einstein Bros. Bagels restaurant on Orange Avenue.

Michael Owen, the artist painting the mural, is the creator of the Baltimore Love Project, a concept which seeks to spread connectivity through murals Owen designed that feature four hands spelling out the word "LOVE." In Baltimore, Owen painted 20 identical murals and he has since painted similar murals in other cities.

For the mural across from the site of the worst mass shooting in modern U.S. history, Owen says he plans to paint his iconic design adorned by 49 orange blossoms to honor the 49 victims who died on June 12. On Sunday, Owen was measuring the restaurant wall and drawing an initial sketch.

"I wanted to do something that referenced the loss but also talked about those lives, their energy and positivity," he says. "The LOVE hands are going to be real clean and graphic like they usually are, but the flowers are going to be really expressive and have a lot of emotion and energy to them." 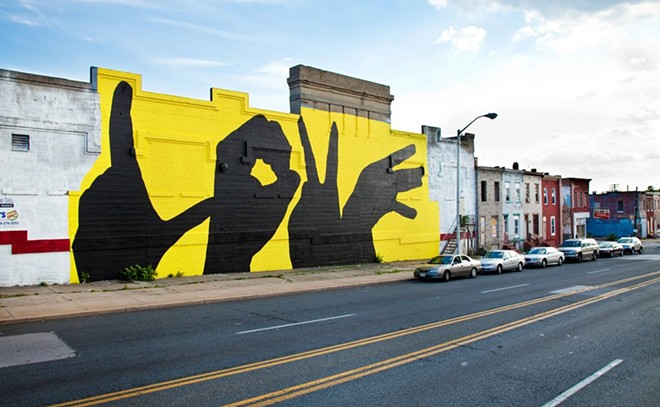 Owen, who attended Dr. Phillips High School in Orlando, says the project is about bringing communities together and putting the word "love" into the landscape and people's minds.

"I wanted to do something because I felt defensive of my second home — my family still lives here," he says. "But I know these LOVE projects have to be requested. The mural has to be asked for. So after my friends in Baltimore and Orlando started asking for LOVE mural, I started searching for walls."

Owen says he's still trying to process the tragedy, and watching others still visit the site after four months has been moving.

"It still blows my mind that there can be so much hate against a certain person, against a certain type of love," he says. "The LOVE hands as silhouettes mean the hands can be anybody's — man or woman, black or white, gay or straight. It doesn't matter who these people are. Love is for all these people."

Owen says he plans to be finished with the mural by Wednesday, Oct. 19. Orlando Weekly will update readers as the mural progresses, so make sure to check back here.