October 17, 2016 at 3:42 PM
comment
So it's official. Again. Not to beat a dead horse (or pig in this case), but it bears repeating that the Ravenous Pig will be moving into the Cask & Larder space, only it's much sooner than we thought.

In a press release sent out today, the restaurant revealed it would be taking over the Cask & Larder space in the beginning of December, and that Cask & Larder would move to the new 6,000-square-foot location at the Orlando International Airport, which opened Oct. 14.

The Cask & Larder Brewery, however, is staying put and will continue to operate out of the current space.

That's quick work seeing that back in May, our claims of the Pig moving were vehemently denied by the restaurant, not to mention other press outlets so, just for fun, let's post this official statement sent out by the Pig back then, shall we?


"Contrary to recent media reports, The Ravenous Pig has no plans to move in the forseeable future. But we do have several big announcements to make about upcoming plans that will continue our efforts to enhance Central Florida’s culinary community."


Oh, and let's post this weeny little story from the Sentinel too. Again, just for fun. 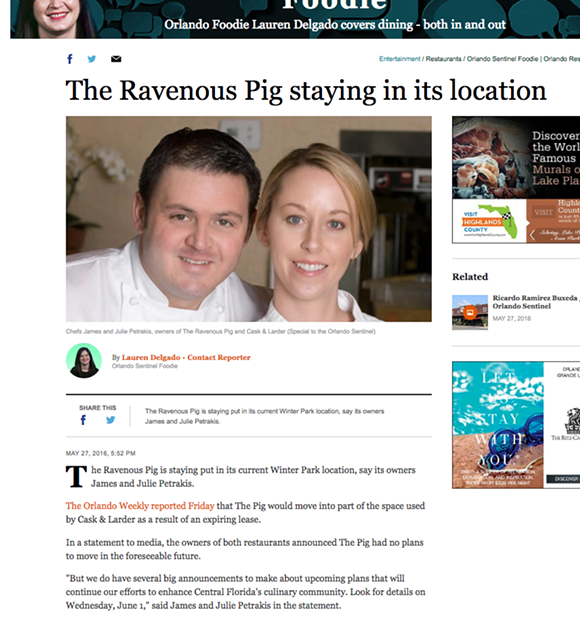 Yes, we do enjoy having fun here at the Weekly.

In the meantime, Cask & Larder will serve its final meal on Oct. 30 as it shutters for a remodel, which will include upgrades to the exterior (including a new entrance and parking area on Pennsylvania Avenue) as well as an expansion in the restaurant's capacity from 120 seats to 140 seats.

While the C&L spaces undergoes renovations, the current Ravenous Pig site will continue to operate through the end of November.