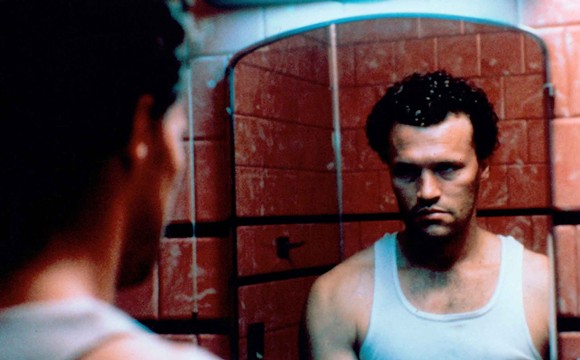 Henry, one of cinema's most memorable serial killers, is turning 30 years old. That means, of course, that he can finally run for U.S. Senate. Considering our real-life political alternatives in 2016, that might actually be less of a horror show, comparatively, than one might think.

But, nevertheless, it's probably a good thing that instead of being on Capitol Hill, Henry will be back in cinemas, where he belongs.

Henry: Portrait of a Serial Killer, directed and co-written by John McNaughton and starring Michael Rooker in his screen debut, is getting a limited rerelease in a new 4K restoration. (The closest city to ours showing it on the big screen is Atlanta; however, the movie is also streaming on Netflix.) Many under the age of 45 will be seeing it for the first time, considering it was rated X and received only a limited release four years after it debuted at the Chicago International Film Festival in 1986. But the effect and influence it had on popular culture, loosing a flood of serial killer chic, cannot be overstated.

Loosely based on real serial killer Henry Lee Lucas, the film is a frank and unpretentiously brutal look at a few days in Henry's life, during which he hangs out with a fellow sociopath, Otis, and Otis' sister, the unsuspecting Becky, while committing unspeakable atrocities. Though Henry does seem to have some sort of perverted ethical code – at least in his own mind – he exists only to survive. And he survives solely on his principle of "it's either you or them."

Grittily shot on 16mm with a budget of just $100,000 and no shooting permits, the production can look amateurish and dated to young eyes (particularly those who've grown up during the massive leap forward in camera and video technology of the past 30 years), but that's actually part of its charm, especially when combined with Rooker's straightforward but mesmerizing turn and the sympathetic and slightly sad performance of Tracy Arnold as Becky. The late Tom Towles, as Otis, however, was just plain bad, despite some appropriately creepy teeth and tense chemistry with Rooker.

Henry was partly meant to send a message, to teach a lesson about violence, though the popularity of the film's tagline "Yeah, I killed my mama" as a cultural punchline somewhat undercut any edifying intentions. But while statistics don't necessarily prove we're a more violent society now than we were 30 years ago, we're undoubtedly a more brutal and less social one, despite the rise of "social" media. We've essentially become more like the title character, disconnected from our fellow humans. Film and, indeed, all art doesn't deserve all the blame – or even much of it – but because cinema is a more graphically violent environment now than it was three decades ago, it raises the question: Do we, the movie-going public, demand more violent content, or are today's filmmakers simply less hesitant to give it to us? Either way, it's clear that violence bothers us less than it used to. And perhaps Henry unwittingly played a small part in getting us where we are today.

Of course, the 1970s and '80s were, in general, fairly violent cinematic decades, at least when compared with the Production Code era. But, for many, Henry projected a heightened brutality because of its bleakness and lack of commentary. It wasn't saying anything about the horror – it was just letting it be. In that respect, it was more disturbing – yet also more mature – than the cartoonish, gratuitous bloodbaths of '80s action films.

Regarding the shockingly abrupt and dispassionate ending, which is almost as emotionally jarring as the finale of Five Easy Pieces, Rooker says, in the documentary Portrait: The Making of Henry, "It's the only resolution that could be. Otherwise it would be just like any of the other, you know, bullshit Hollywood slasher movies."

Co-producer Steven Jones, in the aforementioned doc, recalls a conversation he had with one viewer: "I had sort of an argument with a fellow who stood up and said, 'I felt terrible at the end of that movie.' And I said, 'That's sort of the point. You're not supposed to feel good about this. ... What did you think of the Schwarzenegger movie where they machine-gunned these 360 people?' ... He said, 'Well, that's entertainment.' And I said, 'Well, there's something wrong with you.'"

So go ahead and watch the re-release of Henry. You might be moved by it, you might be disgusted by it, and you might even consider it great art. But if you're entertained or amused by it, there is probably something wrong with you.