Florida is only a couple weeks away from potentially passing the pro-medical marijuana-friendly Amendment 2, so naturally anti-pot groups want you to worry about your kids getting "pot candy" this Halloween, something that absolutely never ever happens.

On Monday, October 24, Orange County Sheriff Jerry Demings capitalized on parent's seasonal anxiety surrounding strangers handing out Halloween candy, warning everyone to be on the lookout for marijuana-laced candy this weekend, reports the Orlando Sentinel.

Speaking at a news conference hosted by the anti-medical-marijuana group "Don't Let Florida Go to Pot," Demings went on to warn citizens that if we pass Amendment 2 this November, a common-sense bill that would legalize medical marijuana and help people with debilitating illnesses, then potheads will more than likely start handing out weed candy to kids.

"It looks like any other candy," Demings said. "Sometimes there's just mean-spirited people who infuse these type of products into our society to create confusion and injure our children and other people."

"Even though the potential for the marijuana edibles appearing this year may be somewhat minimal," said Demings, "it is still a threat in our community."

The fear that parents should be on the look out for devious druggies attempting to disperse dope via trick-or-treating has been debunked and over and over again. Sure, be a responsible parent and check your kid's bag for anything weird. But the likelihood of you finding weed is next to zero.

In fact, you're actually more likely to get Ebola this Halloween than receive pot-laced candy ... 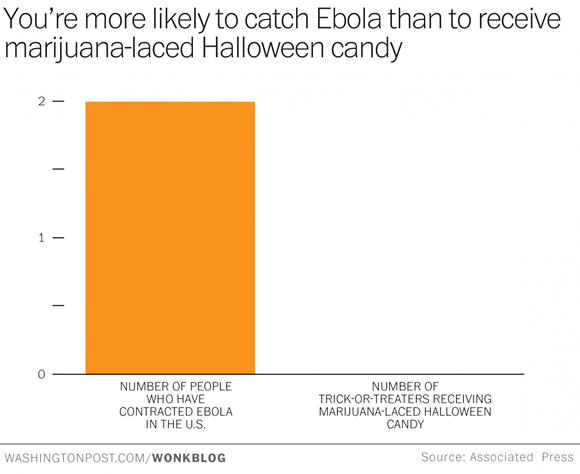 The idea that there's people out there who will maliciously handout drugs to kids is based on nothing. According to the Guardian, throughout the whole year of 2014, the weed-friendly state of Colorado had only 16 cases of accidental marijuana ingestion with children under the age of 9. During Halloween? Zero.

How about in the state of Washington, another place were recreational marijuana is legal? Again, zero cases.

It's important to note that Amendment 2 isn't pushing for recreational marijuana use, it's asking that we allow state-approved doctors to prescribe medical cannabis to patients suffering from debilitating illnesses like cancer, HIV, Lou Gehrig's disease, and Parkinson's disease – a treatment that medical experts agree is extremely effective.

This isn't a new revelation. Medical marijuana is already legal in 25 states and Washington D.C.

Sorry Demings, but no stoners, let alone cancer patients, will be handing out weed this Halloween.