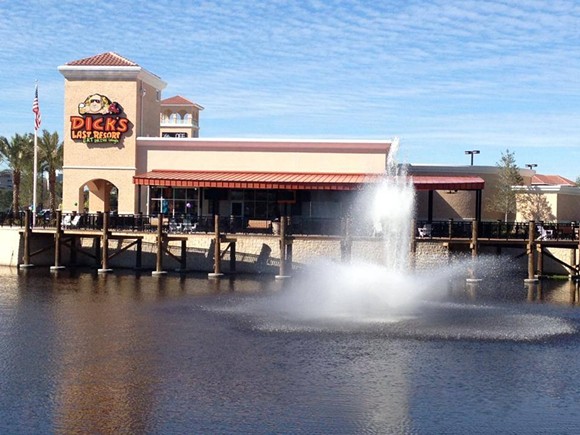 Dick's Last Last Resort, a restaurant chain known for its southern comfort food and incredibly rude service, abruptly closed a handful of franchises this week, including its Orlando location.

Last Sunday, Oct. 30, rumors that the Orlando restaurant closed without notice, or even warning its staff, began to circulate. Now Dick's Google, Yelp and Facebook pages all show a "Permanently Closed" status.

On top of this, the phone at the Orlando location has been disconnected and our calls to the corporate office in Nashville have not been returned.

It would appear the abrupt closing of the Orlando location isn't an isolated incident. Over the past couple weeks, Dick's have also closed in San Diego, California, Columbus, Ohio and Newport, Kentucky.

According to WCPO, these locations didn't necessarily close because they weren't profitable. Harold Dull, the general manager of the Newport property, told WCPO that he spoke with Dick's brand president Jeff Ash over the phone, who claimed the franchises were shut down because of corporate financial trouble.

A former employee at the Orlando location reached out to us via email and wished to remain anonymous:


The closure legitimately came out of nowhere to us. Saturday we had a meeting, found out we were up in sales for the year, and talked about up and coming changes for the store (delivery service to hotels, menu changes etc). It was a really positive meeting, we talked about going into busy season and hiring new employees, and then less than 24 hours later, our management woke up, went into work, and found out the store was closing- that day.

People that were scheduled to work that morning showed up and instead of serving boxed up the copious amount of crap on the wall, and then by the time the store was packed up Sunday, all of us were out of jobs. It was crazy. I woke up to missed calls and texts from coworkers that were really ambiguous saying "did you hear about dicks", so I figured something bad happened but never would I think it was the fact the company closed us down over night?

Another former employee, who also wished to remain anonymous, told us via phone that the GM didn't know the place was closing until the last shift was over on Sunday, Oct. 30. However, the next day, 3/4 of the staff still showed up to pack up the place, that’s how much they cared about it. "We were angry we were hurt. Please give us jobs," the employee added.

If any other former employees from the Orlando location have anything to add, feel free to email me here.