'Doctor Strange,' or How I Learned to Stop Worrying and Love Comic-Book Films

It’s no accident that the modern comic-book movie was born shortly after the birth of CGI. They need each other to distract the audience from their subjects’ lack of profundity, just like 1920s sound and 1930s Technicolor made viewers forget the more mature black-and-white silent medium.
But before I entirely lose every single fanboy, let me acknowledge that the best comic-book films do indeed contain compelling, if often simplistic, storytelling. Still, the special effects, art direction and cinematography rarely rise above the level of an adolescent action film. They are flashy but rarely fulfilling. They advance the story but seldom inspire. But then there’s Doctor Strange.

“You lack imagination,” Strange tells Mordo. The same cannot be said for this film, which is a triumph of technological imagination and, along with the original Avengers, one of the two best Marvel movies ever. tweet this
The big-screen adaptation of the comic-book hero introduced by Steve Ditko and Stan Lee in 1963 is a different species. It’s Marvel meets mysticism meets M.C. Escher, and, like Inception, from which it clearly draws artistic inspiration, it’s a trip – visually, emotionally and even spiritually, if you can tune out the sporadic silliness, misplaced humor and the occasional over-the-top moment.

This is an origin story, so you don’t need to know anything about Dr. Stephen Strange in advance. A brilliant neurosurgeon, Strange (Benedict Cumberbatch) has his life upended when a car wreck leaves his hands shattered. Eschewing affection from his girlfriend, Christine (Rachel McAdams), and focused solely on his physical recovery, Strange journeys to Nepal. There he’s exposed not to the science-based, physical cures that he expected, but to spiritual ones. 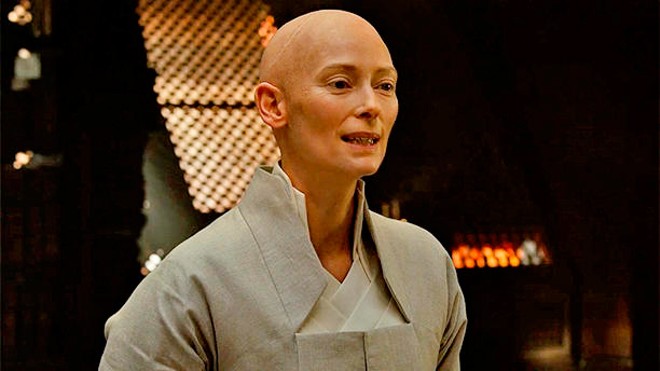 He meets the Ancient One (Tilda Swinton), her star pupil, Mordo (Chiwetel Ejiofor), and a host of other disciples who reveal to him the astral plane and other dimensions heretofore unimagined. (It’s the job of this band of spiritualist warriors to protect the Earth from mystical threats, as the Avengers protect it from physical ones.) Strange also learns of the evils that lurk in those other dimensions and just how dangerous – and mind-bending – time itself can be. And so we finally have a Marvel movie about something.

Cumberbatch is, surprisingly, just adequate as the good doctor. OK, so the character is not exactly good. In fact, he’s described as both an “arrogant ass” and “disrespectful,” and his snarky banter lowers the film’s IQ level a tad. But only by first portraying Strange as immature can the filmmakers show his maturation.

Ejiofor is splendid, as is Swinton, and their presence elevates the film substantially. Her Ancient One may even remind viewers of Obi-Wan Kenobi, particularly since Strange is a bit of a cocky know-it-all, just like young Luke Skywalker. Swinton is no Alec Guinness, but she dominates every scene she’s in and proves that changing the character from male to female was a wise decision.

The film’s version of Kaecilius is actually a composite of several villains from the comic. Played adequately by Mads Mikkelsen, he’s arguably the most interesting character, as he makes a pretty strong case for turning toward the “dark dimension, a place beyond time.” Time, he argues, is our real enemy, and that’s difficult to deny.

The film is co-written and directed by Scott Derrickson, who is perhaps best-known for helming one of the scariest films of the last 20 years, The Exorcism of Emily Rose, in addition to another creeper, Sinister. He’s aided tremendously by cinematographer Ben Davis and a brilliant special-effects crew who use all the tools at their disposal to create landscapes that captivate while rarely overwhelming the story.

As is the case with all other Marvel movies, Doctor Strange was shot in 2-D and converted to 3-D in post-production. In some scenes, the 3-D is too dark and distracting, and it doesn’t work well in the non-CGI scenes and with handheld camera. But when the film morphs into its digitally animated dreamscapes, the three dimensions come alive and suck you into one of the best adventure films of 2016. (I can’t wait to see whether Doctor Strange or The Jungle Book wins the Oscar for special effects.)

“You lack imagination,” Strange tells Mordo. The same cannot be said for this film, which is a triumph of technological imagination and, along with the original Avengers, one of the two best Marvel movies ever.