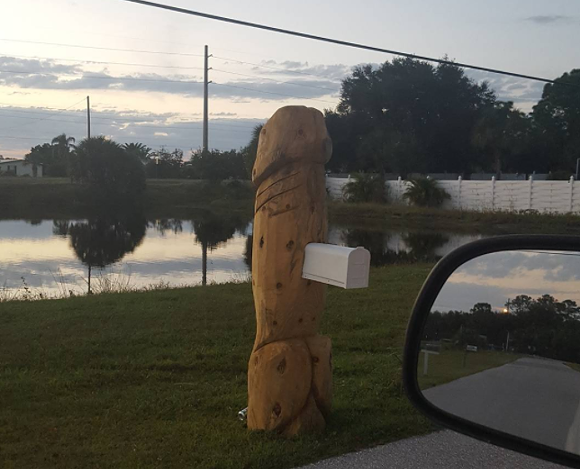 As a random gift to his mother, Englewood, Florida, resident Danny Duncan decided to give her a new mailbox, which just so happens to be shaped like a huge penis and carved from a single block of wood.

"I just told her that I had a surprise for her," said Duncan to Fox 4. "I thought I was getting a Harley or a car, and that's what I got," said his mother, Sue.

In that same interview, Duncan told the station that his name was "Gary Winthorp" for some reason, and now because of that, just about every station is calling him Gary Winthorp.
So far, most people seem to be OK with the 500 lb, 6.5 ft tall mailbox. Others, not so much. "Some of the neighbors put real estate magazines in her mailbox to basically tell her to move and give her some dirty looks," said Duncan to the station.

Here's Duncan with an inspiring message...