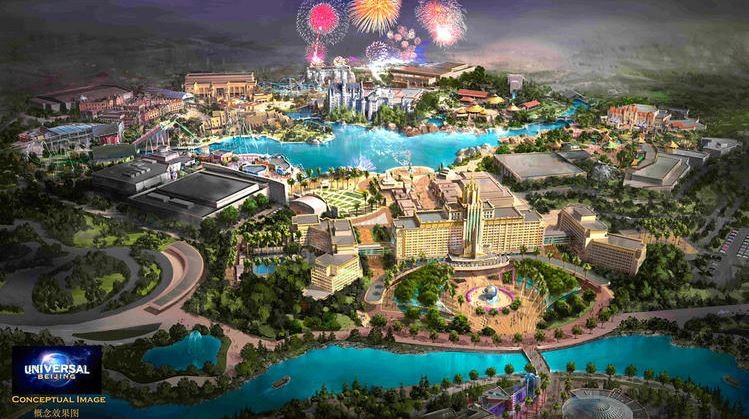 Universal has been on a streak of success lately both here in Orlando and at its other parks around the world– including in Hollywood, which just saw the opening of what is now the third Harry Potter themed Wizarding World land.

In Japan, plans are in the works for major updates before the 2020 Olympics come to that country. Singapore has seen numerous positively received additions, including a new Puss 'n Boots coaster and the reopening of their Battlestar Galactica dueling coaster.

Now Universal is hoping to replicate this success with another Asian park, this time in Beijing. After announcing the resort back in October 2014 Universal fell quiet on it, similar to how they have on the now assumed dead projects in India, Russia, South Korea, and the recently confirmed dead resort in Dubai.

The Chinese resort project popped back into the news late last year when a groundbreaking ceremony took place, but Universal has had plenty of those on various canceled projects over the years. Now though, we have the most promising sign that the Beijing park will actually be fully realized. Major construction equipment is now active on the 1,000-acre site. Altogether the new resort has already secured $7.4 billion in financing, ballooning from the original $3.3 billion cost first proposed for the resort.

The central feature of the new resort will be a brand new Universal Studios theme park. artwork shows off a Harry Potter focused area with both Hogsmeade and Diagon Alley, an Egyptian-themed land, Shrek land that looks to be similar to the one found at Universal Studios Singapore and more.

Missing from the artwork is any indication of Marvel in the park. Disney, which owns Marvel, is putting the final touches on a new Iron Man ride at its faltering Hong Kong Disneyland. The new Disneyland Shanghai also has a Marvel-themed pavilion with numerous small-scale attractions, similar to the Innoventions attraction that was formerly at Epcot. There does seem to be a large, outdoor Hulk style coaster but there’s no indication on theming.

In the artwork, we see a new hotel that seems to draw heavily from a retro Hollywood themed hotel that was planned but canceled here in Orlando. Overall, the Beijing resort looks to be a copy of Universal Orlando. Various message boards have discussed different plans for the resort that seem to show 5 hotels (Universal Orlando just opened its 5th hotel, Sapphire Falls), 2 theme parks, a CityWalk and a lushly landscaped water park that will likely be the world’s second Volcano Bay water theme park.

The opening date has been pushed back from 2019 to 2020 but with construction now finally ramping up it looks like China will actually have its very own Universal resort.