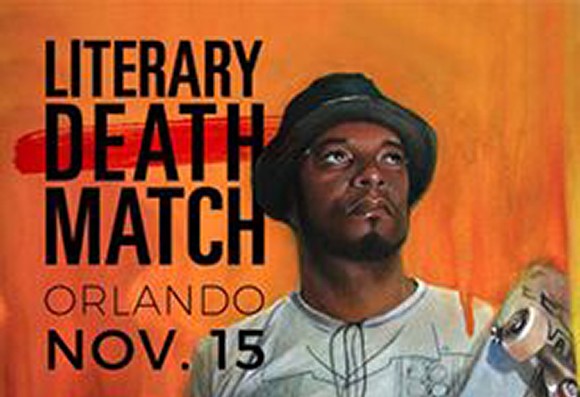 The decade-strong episodic reading series Literary Death Match returns to Orlando for a fourth duel tonight, hosted by local independent publisher Burrow Press. Literary Death Match prides itself on being humor-centric, stating, "It may sound like a circus – and that's half the point." Rooted in performativity, LDM fuses the fervor and competitiveness found in slam poetry with other forms of literature, extending our traditional perception of readings. Four authors performing original work (Glendaliz Camacho, Trevor Fraser, Suzannah Gilman and Ama McKinley), three celebrity judges armed with serious credentials (iconic skateboarder Chuck Dinkins weighing in on "performance," Billy Manes on "literary merit" and Kay Rawlins of the Orlando City Soccer Foundation on "intangibles"), two finalists, and one champion will rise above the inkshed, shunning the classic trophy of a coffee-bar microphone for cold, hard cash. Nothing is predictable as the writers wrangle. Ticket proceeds from this fundraiser event support Burrow Press.