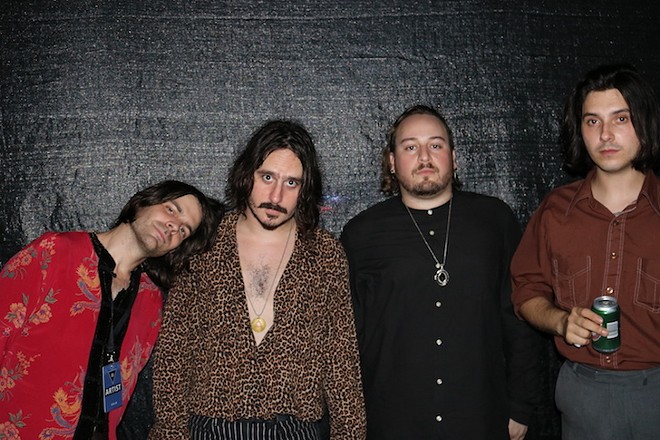 For Orlando concertgoers that are not familiar with the outfit, Plastic Pinks have been scene staples in Miami since 2013, mixing garage rock with Latin roots into a meridian of fixated live rock and roll. They've just released a crucial new EP, El Animal, and are taking these new songs to Will's Pub tonight, where they're opening for Broncho. Orlando Weekly chatted with Augie Pink and Dane Giordiano about their new music and their new lineup.

What’s new for the Plastic Pinks?
Augie: We are in the process of building bigger, broader sounding music. We still have our energy, we still have our garage rock sound, still a lot of rock and roll. We are letting more experimentation within the band, making sure the band gets to do what they want to do and that everyone has a good feel for the music.

Can talk a little about the changes to the band’s lineup?
Musically, this is the best lineup we have ever had. I feel like (Woolf and Mustoe) have brought a new energy, and a new mindset on how to tackle the songs. It comes very natural with them, so I feel like it has a been a process that has really helped us grow.

What has been the experience of putting together the new EP?
We are really proud what we’ve done. It makes us happy to know that we can keep impressing ourselves with the creative process and the challenge. We’ve been creating a lot of new music and from that our new EP, El Animal. The album is set to release November 5th on our label, Ghost Drag Records. We were really excited to have parts of the album mixed by Gordon Raphael (famed producer of The Strokes and Regina Specktor).

Any plans for a full album release in the near future?
We are in the process of recording a full-length album set to come out early next year. We had eight songs that were done and decided to scrap them all to record with band as it is now, to fully capture our actual sound. The recording process brought us together, that chemistry and bond.
Dane Giordiano: We were all homies and best friends before, no random Craigslist ads. We kept it in the family, and all knew each other before coming together as a band. We are excited for the album release and the tour.

Plastic Punks play with the Palmettes and Broncho at Wills Pub tonight. Doors at 7 p.m. and tickets are $12.