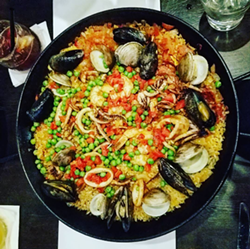 It's hard to believe that a steaming cast-iron pan of paella could get any better, but it can. We promise.

If you're looking for a truly authentic paella-eating experience, there are two "secret" requests at the I-Drive 360 Spanish spot, Tapa Toro, you can make of your server that will 100 percent amplify your meal.

1. Ask for the soccarat. Almost every rice-centric culture, Asian or Latin-American or Iberian, has a word for the crispy bits of burned rice at the bottom, sometimes reserved for the elderly family members because it's so desirable. In Spain, it's called the soccarat, but they'll only do it on request at Tapa Toro. The paella at Tapa Toro already takes about 30-40 minutes to come out (it's not pre-made then reconstituted with stock — they make it to order every time), and adding the soccarat will make it take a little longer, but it's so worth it, and way more authentic.

2. Give it a splash of sherry. Spain is known for its fortified wine known as sherry, and in the northwest corner of the country, they make a sherry called Jérez. Paella is already full of flavor, but adding a little drizzle of Jérez to your portion and folding it in adds even more depth, between the must of the grapes and the alcoholic zing. A shot of the stuff is only $3, so it's a worthwhile add-on to add a little panache to your plate.

If you're ready to take the plunge into that amarillo Arborio, the seafood paella at Tapa Toro will run you $35 (and feeds 3-4 comfortably), and the lamb and chicken paella is $42.