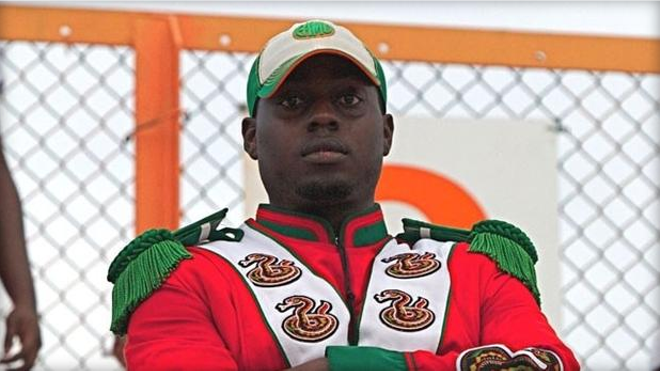 A three-judge panel of the 5th District Court of Appeal, in a 16-page ruling, rejected arguments by attorneys for Dante Martin that Florida's hazing law is overbroad and that a circuit judge made a series of errors such as refusing to exclude autopsy photos from the trial.

Martin, now 29, was found guilty of manslaughter, felony hazing resulting in death and two counts of misdemeanor hazing in the Nov. 19, 2011, death of Champion, who was injured in Orlando during a ritual known as "crossing Bus C." During the ritual, band members were struck repeatedly as they crossed from the front of the bus to the back, and Martin was "president" of Bus C, Friday's ruling said

Champion, whose death drew national attention, passed out after finishing the crossing and later was pronounced dead at a hospital. Martin was sentenced to 77 months in prison after being found guilty by an Orange County jury and is an inmate at the Wakulla Work Camp, according to information on the state Department of Corrections website.

During the appeal, Martin's attorneys, in part, attacked the constitutionality of Florida's hazing law, arguing it was overbroad and vague. But the three-judge panel rejected the arguments, which included issues related to First Amendment protections.

"The defendant asserts that Florida's hazing statute encroaches upon constitutionally protected speech or conduct and, thus, the statute is overbroad; however, he does not articulate how the statute is susceptible of application to speech or conduct protected by the First Amendment. … The defendant has not demonstrated that the hazing statute criminalizes any speech or conduct protected by the First Amendment; therefore, his over breadth challenge fails," said the ruling, written by appeals-court Judge William Palmer and joined by judges Thomas Sawaya and Jay Cohen.

Martin's attorneys also argued that Orange County Circuit Judge Renee Roche made errors, including allowing prosecutors to use autopsy photos that would be "unduly prejudicial" for the jury. But the appeals court backed Roche on the autopsy photos and other issues.

"Champion's autopsy photographs assisted the medical examiner in explaining to the jury the nature and manner in which the wounds were inflicted on his body," Friday's ruling said. "They also reinforced the testimony from other witnesses indicating that Champion had been repeatedly struck during the crossing. Importantly, the photographs were relevant to an issue that was in dispute: whether Champion was the victim of 'any brutality of a physical nature, such as whipping, beating, branding.' … Also, as for the claim that the photographs were not admissible because they were too gruesome, the trial court ruled that the photographs were not unnecessarily gory, and independent review of the record supports this conclusion."

Champion's death came during the annual "Florida Classic" weekend, which includes a football game between Florida A&M and Bethune-Cookman University. This year's Florida Classic will be played Saturday in Orlando.