Disney releases details on Pandora: The World of Avatar, confirms it's opening next summer 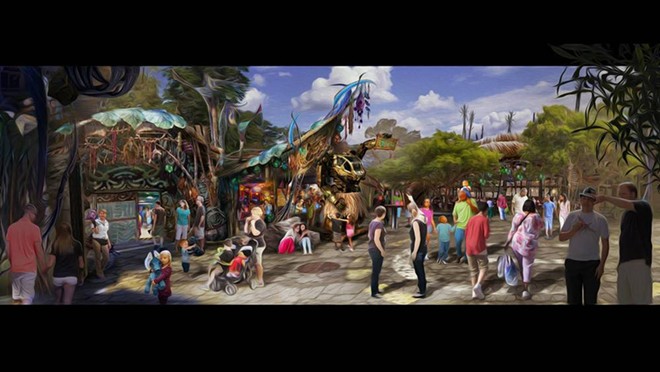 After nearly six years of confirmations and announcements, Disney finally gave us an opening date for Pandora: The World of Avatar at Disney’s , well, kind of. They’ve now confirmed that it will be opening Summer 2017 but no specifics have been released regarding the opening date.

Disney has released some incredible details on what the new land will feature. Taking place years after the timeline of the first film Pandora has recovered from the war with humans and is now welcoming guests. Festive, colorful buildings reuse the ruins left over from the war. In renderings released this past week by Disney, we see a robotic humanoid vehicle similar to one used in the first film. It has been fitted with a hula skirt and a tiki bar sign. Guests are transported to Pandora by Alpha Centauri Expeditions, who is offering tours of the now peaceful planet.

We also renderings of a fast-casual restaurant and a gift shop. The gift shop rendering includes a D-Tech area towards the back of the shop. D-Tech is Disney’s in-house brand that specializes in custom phone cases and other customizable items.

The restaurant looks to be in a building themed to an old rounded roof military style metal hanger. Tim Grassey of WDWThemeParks, a fan-based rumor and news tracking site dedicated to Walt Disney World, notes that the restaurant has a “Rainforest Café vibe” with the various props that fill the space.

The bioluminescent plants were talked about by Disney but no details on where, how many or in what setting the plants will be displayed was given. The strongest rumors point to a walking trail where guests can interact with the plants.

The two biggest draws of the new land are the new rides; Flight of Passage and Na'Vi River Journey. The Na’Vi River Journey will be a family boat ride where guests will meet the Shaman of Songs, an impressive hyper-life like audio-animatronic Na’Vi. The AA features incredibly detailed facial movements. It will be the only physical Na’Vi that guests will see in Pandora, but others will likely be featured via video screens in other attractions. The River Journey will also feature a similar ride system and other technology that Disney first unveiled at the award-winning Pirates of the Caribbean in Shanghai Disneyland. That ride has quickly become the must-do of the Shanghai resort. The Na’Vi River Journey is believed to be a slow moving ride where the various plants and animals of Pandora are featured; a kind of ‘Living with the Land’ meets ‘E.T.’ but with occasional screens and lots of lighting effects.

The second ride, Flight of Passage, will allow guests to board “living, breathing” banshees for a flight similar to the one taken in the first film. “Nothing would surprise me with this ride. Disney is going all out on it and is using every technology they have. At this point, we still don’t know what all it will entail but I expect both physical and digital aspects,” explains Tim Grassey of WDWThemeParks, “While the River Journey is being billed as a C-Ticket both of these rides will be E-Tickets in the technology they use and the uniqueness of the experience.” Flight of Passage has been compared to the hang glider simulator Soarin’ but with individual cabins, similar to The Simpson’s ride at Universal Studios.

In October 2012, documents supposedly related to the two rides were leaked. The leaked documents showed 4 theaters featuring curved screens for what we now know as Flight of Passage and a winding boat ride, that we now know is the Na’Vi River Journey. The documents, now over 4 years since their initial leak, seem accurate. That can tell us that no major changes have happened in that four-year span for the basic concepts used in the rides, though updates on the storyline, screen resolution, and other things very likely have been updated since the original leak.

Pandora will be accessible from Discovery Island in with a smaller, secondary entrance from Africa that may open after the initial crowds die down.

Hopefully Rivers of Light, the other big thing coming to , opens before Pandora though no timeline or even hints of one have been given