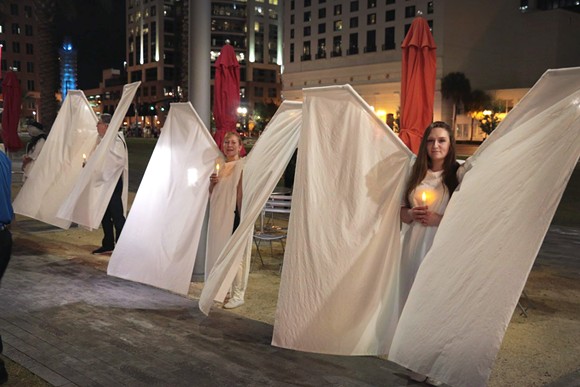 The angel wings constructed of PVC pipe and white fabric that have made recurring appearances in Orlando since the Pulse massacre will get a new home next Tuesday.

The Orlando Shakespeare Theater will be relocating the "Angel Action Wings for Orlando" to the GLBT Community Center of Central Florida on Nov. 29 at 3:30 p.m., according to a press release. The wings were originally constructed to protect mourners attending the funeral of one of the 49 victims in downtown Orlando from anti-gay protesters. Since then, the angels have also appeared at the "Beautiful Together" benefit concert held at the Dr. Phillips Center and at Orlando's Come Out with Pride parade earlier this month.

"Orlando’s Angel Wings have become an inspiring image of love and unity in our community," says Jim Helsinger, artistic director at Orlando Shakes in a statement. "We have been honored to use them to pay tribute to those who lost their lives because they chose to love openly and wholly. In the end, love always wins."

The Center will be responsible for the 49 sets of wings from now on, according to the release.

"Personally knowing the history of the wings, what they stand for, and their specific mission, The Center is prepared to take on this assignment and will treat the wings with the utmost respect," says Terry DeCarlo, executive director of The Center, in a statement. "The Center will also be creating a community 'Angel Force' made up of individuals who will be trained and dispatched to special events where the wings are needed."

Orlando Shakes says it will also donate two sets of wings to the Orange County Regional History Center for a community display.