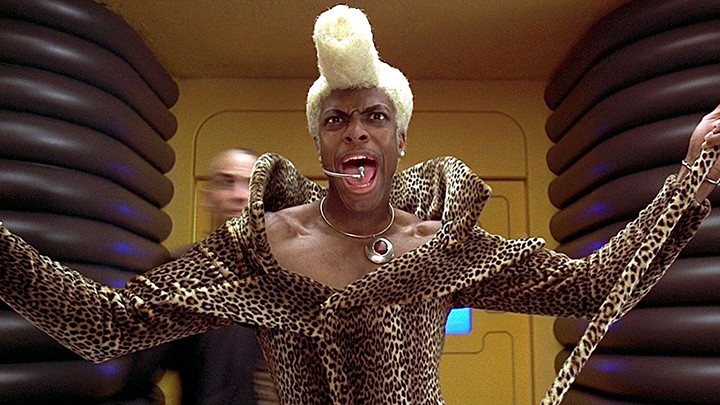 In a tour de force one-two punch, French director Luc Besson wrote and directed a back-to-back pair of films that will forever define the look and feel of the 1990s: The Professional (1994, Natalie Portman’s feature film debut as a 12-year-old assassin) and The Fifth Element (1997). While they share a certain comic-booky improbability, The Professional was a gritty, emotional thriller, while The Fifth Element was a goofy grab bag of futuristic silliness … hence its utter genius. There are so many iconic figures and moments in The Fifth Element that it’s effectively a time capsule of ’90s obsessions: Milla Jovovich as an orange-haired alien in Jean-Paul Gaultier bandages; trip-hop star Tricky as a lackadaisical evil henchman; Chris Tucker in his last, and perhaps only, brilliant role as the ambiguously gendered broadcaster Ruby Rhod; and let us never forget the sight and sound of the aria-warbling, 10-foot-tall, tentacled blue Diva Plavalaguna. The “official movie trailer” you’ll find on YouTube is straight garbage and manages to capture roughly nothing of the actual film experience, but The Fifth Element is such a mystery basket of absurdities and brilliance that it might be impossible for a trailer to capture. This Cult Classics screening is timed to prime us for Besson’s latest sci-fi madness, Valerian, out in early 2017, but we’ll happily settle in to relive a vacation on the planet Fhloston Paradise that went terribly awry.