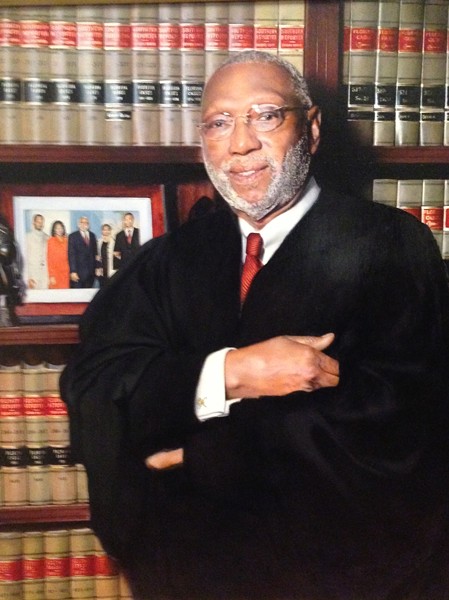 The face-to-face interviews at Orlando's GrayRobinson law firm allowed the nine-member Supreme Court Judicial Nominating Commission to query the candidates about issues ranging from which state justice they would emulate to what the title of their autobiography, if selected, should be.

The candidates include six judges, a veteran state attorney, an assistant U.S. attorney, a Republican state representative and two lawyers.
There are six female and five male candidates. All are white, and all present themselves as conservative.

During questioning, nearly all of the candidates stressed the need for "originalist" interpretation of laws while vowing to construe laws as narrowly as possible.

"It means essentially being what people call an originalist," Judge Alice Blackwell, of the 9th Judicial Circuit, said, referring to a concept embraced by the late conservative U.S. Supreme Court Justice Antonin Scalia.

The key to avoid being a "judicial activist" is to analyze what the law says, the facts of the case and, "when you apply that law to the facts, what's the outcome that's dictated," Blackwell said.

Blackwell's self-described "conservative judicial philosophy," shared by all but one of the other candidates, is a stark contrast to the justice she and the others are seeking to replace. Perry, who will leave the court at the end of the year because of a mandatory retirement age, is one of five Supreme Court justices who make up a liberal-leaning majority that has repeatedly earned the wrath of Scott and the Republican-dominated Legislature.

The nominating commission is expected to send a list of three to six names to Scott, who will make his first appointment to the Supreme Court.

The interviews Monday included discussion of personal backgrounds, along with judicial philosophy.

For example, Blackwell, 60, said said she was shaped by her roots growing up on a small farm in South Carolina, where her grandfather was once a chief justice of that state's high court. She said she graduated from high school at the top of her class a year early, and realized her lifelong dream of becoming a judge when she was appointed at age 34 in 1991.

"My earliest jobs were caring for chickens and clearing land and delivering eggs," Blackwell said. "I'm terribly interested in the ability to help influence the thinking of other people on the court by virtue of bringing a life experience that is substantially different than what anybody else on that court has."

Several of the applicants heaped high praise on conservative Justice Charles Canady when asked which jurist they would emulate if chosen for the court. Canady frequently authors dissents joined by Justice Ricky Polston; the two are known as the Florida Supreme Court's conservative minority.

"The brilliance is there. Every Thursday you look and say, OK, let's see what the dissenting opinions have brought this week," said Daniel Gerber, a defense lawyer whose recommendations include a letter from onetime Florida Attorney General Richard Doran.

"There is clarity in the restraint that he brings to the process. He has a clear unambiguous understanding about separation of powers," he said.

Lawson, 55, has a lengthy career as a trial lawyer, circuit judge and appellate judge. He applied for two Supreme Court openings in 2008 and lost out on one to Perry, who was appointed by former Gov. Charlie Crist and joined the court in 2009.

Lawson, known in the Capitol for his work lobbying the Legislature for appellate court funding, said he wanted to do more to bridge the gap between the Supreme Court and other branches of government.

"You need to make an effort,” he said, adding that after former House Speaker Dean Cannon was first elected to the Legislature, Lawson invited him to sit in on court proceedings for a day.

A relaxed Lawson appeared flummoxed only when asked about his main weakness.

"I know the governor says he looks for humility. … I need to have a really good answer for this," Lawson said, failing to come up with a shortcoming. "I just think I'm prepared for this position pretty uniquely in a lot of different ways just because … I've done so many things and I've excelled at them. Maybe I'll call you later and have an answer to this question."

While the interviews were exceedingly cordial, the panelists did ask some pointed questions of candidates, especially for those who had never served on the bench, or who have been targeted by opponents.

Commission Chairman Jason Unger asked State Attorney Brad King about a case involving the 2010 shooting death of 24-year-old Michelle O'Connell in St. Augustine. The woman's family opposes King's nomination and harshly criticized King, who was ordered by Scott to investigate the death, for failing to bring charges or to impanel a grand jury.

"Obviously, nobody is going to agree with everything my office does," King, who is based in Ocala and has served as 5th Judicial Circuit chief prosecutor for nearly three decades.

King said he based his decision not to pursue a case on his belief that he could not get a conviction.

"It really got, as sometimes it does when involving a death, people dig in. They believe that they know what happened and that their opinion is right and they don't want to listen to anything else. That's really the situation we got into with that case," he said.

King was also asked about the death penalty, one of the primary focuses of the seven-member Supreme Court. He said he disagreed with a January ruling by the U.S. Supreme Court, in a case known as Hurst v. Florida, which overturned the state's death penalty sentencing system because it gave too much power to judges, instead of juries. He also strongly criticized a recent Florida Supreme Court decision that found a new law, aimed at addressing the Hurst ruling, unconstitutional because it did not require unanimous jury recommendations for death sentences to be imposed.

The Florida court majority "went well beyond the parameters" of the appeal, King said.

"That was my concern, that they took that broad (of) an approach to that whole issue," he said.

King said he would be forced to recuse himself on between 22 and 36 death penalty cases that were tried in his circuit.

State Rep. Larry Metz, who served as chairman of a House budget committee that controls spending for the courts, elaborated on the tension between the courts and the executive and legislative branches when pressed.

The Supreme Court should decide cases and controversies on the "narrowest" of interpretations of law, Metz said, "so you don't end up stepping on the toes of the other branches of government."

"When you have the Legislature passing a law and you have the court invalidating it without needing to invalidate it, that's going to raise tensions," Metz, 61, said.

The justices have lately "taken a more activist view of their role," he said. "Hopefully that won't continue in the future."