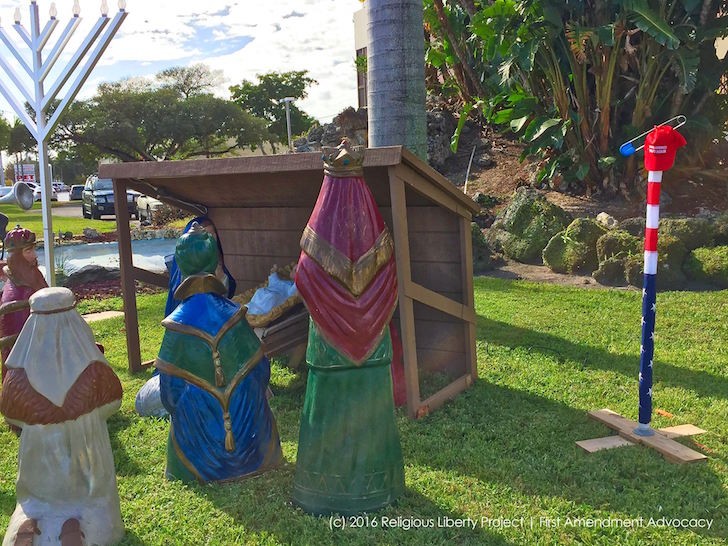 A First Amendment activist has added a Festivus pole mocking several aspects of the campaign and post-election season to a Deerfield Beach nativity scene.

Chaz Stevens, an atheist and founder of the Religious Liberty Project, is continuing his campaign of terror on Trump supporters. His group is known to have worn penis costumes with the then-presidential nominee's face on them at previous campaign rallies.

Now, they've taken their dislike for the president-elect to a new level.

“Wrapped with an upside-down American flag (acknowledging the majority of Americans who didn’t vote for the Pumpkin In Chief), this year’s pole is shorter, a shout-out to Donald’s tiny hands,” Stevens told the Huffington Post via email. “We’ve donned Distresstivus with the infamous Make America Great Again red cap, and fastened it all together with a big ol’ safety pin.”

The move reflects fears that President-elect Trump may take unprecedented steps to curtail freedom of speech across the country. On Tuesday, Trump tweeted that flag-burners deserve to be stripped of their citizenship.

The pole, nicknamed the Disstresstivus Pole, is set up next to a city-sponsored nativity scene that Stevens previously fought to take down. When the city refused, he petitioned to add his own display instead: a Festivus pole.

Last year, the pole was outfitted with rainbow stripes and a disco ball in celebration of the Supreme Court's ruling on gay marriage.

Festivus was popularized by the '90s sitcom Seinfeld, which described its celebrations as an "airing for grievances" partnered with a barren grey pole. It has since become a mock holiday for secular and freethinking communities.

Stevens says he has eight more poles ready to go across the country. He plans to place the Deerfield Beach one in the Florida State Capitol rotunda - across from Governor Rick Scott's office.