The ‘90s redux has absolutely gripped this decade’s style, and no one in town has embodied that spirit with as much fun and fidelity as local indie-rock band the Pauses. For the past three years running, they’ve taken over Will’s Pub and transformed the venue into a wormhole back to one specific year of that era beginning with 1994. This year, they’re up to 1996. And for the first time ever, this third edition has been blown out to a two-night happening (Dec. 2-3).

As the event’s cornerstone, the Pauses play both nights but different sets. And like always, they tap a select choice of current local acts to help them conjure past glory. Opening night featured Overdale, Expert Timing and DJ Prom Nite. Tonight's event features Luscious Lisa, Fictions and DJ Smilin’ Dan. 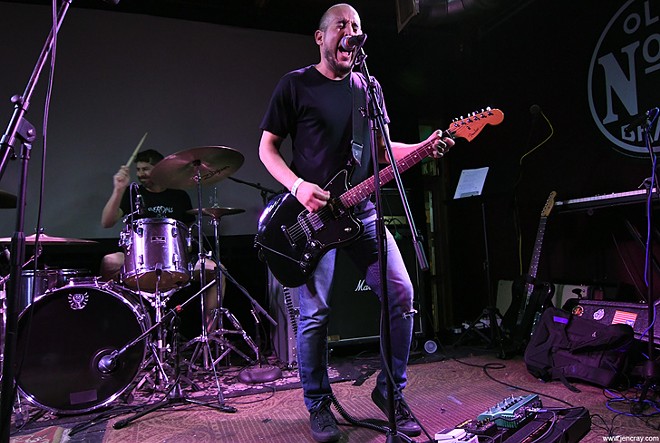 Unlike 1994, with which they began, 1996 was kind of a non-vintage year. Musically, the term “alternative” had by then lost all meaning in rock. Even I had dipped out of that scene for a little while during this spell. But the looks and sounds of the zeitgeist had lots of splash so it makes for the kind of fun that happens when smart musicians combine a karaoke bar and a costume party.

Actually, the Pauses’ year celebrations are much more than just the music. The bands all perform covers from the era but the theme extends throughout the entire bar and includes all sorts of pop-culture ephemera like toys, tech, games, memorabilia and imagery, including a Scream photo booth set with props and costumes.

Here’s a rare moment when the camera gets turned on our trusty rock photog Jen Cray (I'm the one with the knife, as usual):

Besides cocktails inspired by the Spice Girls, the bar even stocked some Icehouse and Bud Ice for the occasion, two drink trends that hold ignominious place in my misspent youth. And, yes, of course I ordered them both last night. If there’s one place that has this much sense of humor and commitment to theme, it’s Will’s Pub. 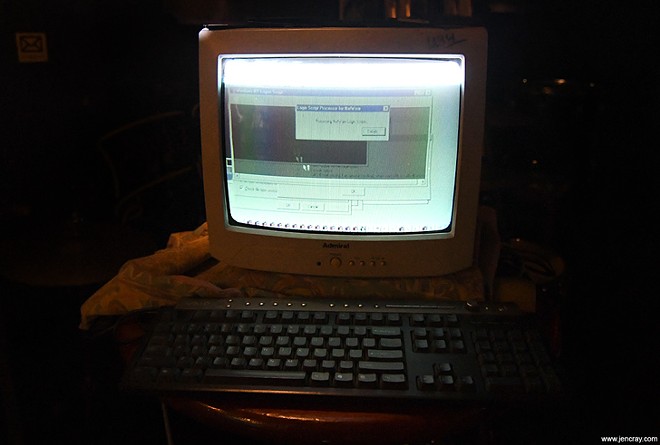 Musically, it was popular nostalgia galore with songs from the likes of Beck and the Cardigans:

But among those were some inspired selections across the board like the Pauses’ cover of Superdrag (“Sucked Out”), Expert Timing’s cover of Mazzy Star (“Fade Into You”) and Overdale’s cover of Jawbox (“Mirrorful”): 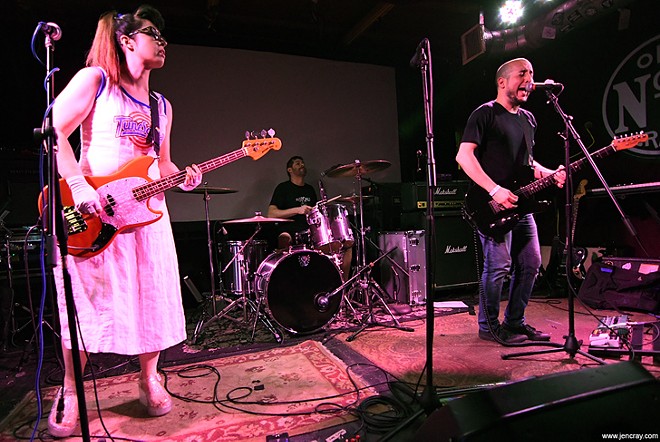 Overdale sounded good with Pauses frontwoman Tierney Tough in the lineup and new band Expert Timing showed enough to make me look rather forward to seeing one of their original sets. 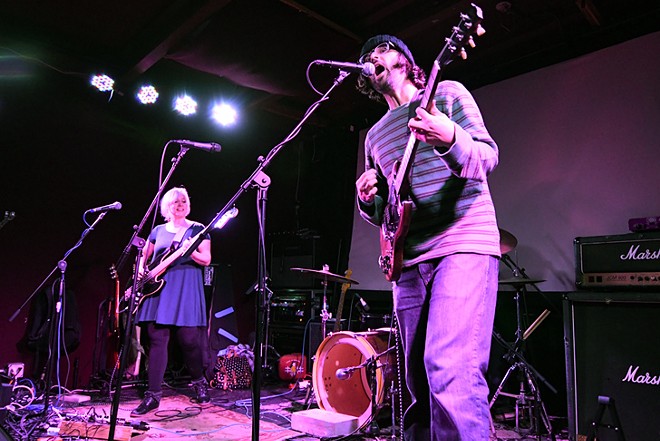 As the anchor, the Pauses sounded and looked the most practiced and complete with a full audiovisual extravaganza that included costumes and video projections with their signature crowd-engaging “Interact-O-Vision” action. But among all their excellent retro visuals, however, the most wicked stroke was playing a cheesy old Will’s Pub television commercial between songs.

There are parties and there are theme parties. But this annual Pauses event is celebration by total immersion, and it’s become the best indie throwback traditions in the city. The best news is that there’s still one night of it left to be had. Do it.