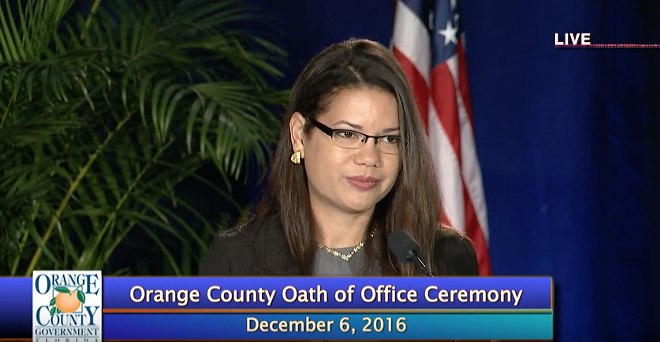 Emily Bonilla and Betsy VanderLey were sworn in Tuesday for their first four-year term as elected representatives on the Orange County Board of Commissioners.

District 3 commissioner Pete Clarke was also sworn in for his second term at the oath of office ceremony at the Orange County Convention Center. With the addition of Bonilla and VanderLey, women are now the majority on the seven-member county board.

East of the Econ founder Bonilla beat incumbent District 5 Commissioner Ted Edwards in November after a bitter fight regarding developments in east Orange County. Edwards was fundamental in bringing forward two projects east of the Econlockhatchee River that would have about 4,000 homes in an ecologically sensitive area. Bonilla joined hundreds of other environmental activists and residents to challenge Edwards' decision. A substantial financial contributor to Bonilla's campaign came from United for Progress, a political action committee that helps Democratic candidates and whose top contributor is billionaire George Soros. At the ceremony on Tuesday, Bonilla says she's ready to be the "people's commissioner."

"I first ran for county commissioner because I could no longer wait for someone to take a stand for our community," she tells the crowd. "I understand I will face tough decision, but I will be listener and an advocate for our community. Together we can make common-sense decisions for Orange County."

VanderLey takes the spot of West Orange's District 1 Commissioner Scott Boyd, who was termed out. In November's election, VanderLey won against Winter Garden Commissioner Robert "Bobby O" Olszewski. The business development consultant was endorsed by many influential political figures and groups, including Mayor Teresa Jacobs, several county commissioners and the National Rifle Association. VanderLey says District 1 residents are "some of most engaged citizens in Orange County."

"If we do this right, our children and grandchildren will find opportunity here for years to come," she says. "Please don't go anywhere now that the campaign is done."

In closing, Mayor Teresa Jacobs assured her newest fellow commissioners that they're embarking on an "incredible journey."

"We have learned as a board that we can come to the table with different opinions," she says. "But we also come with respect for each other and as a collegial board."