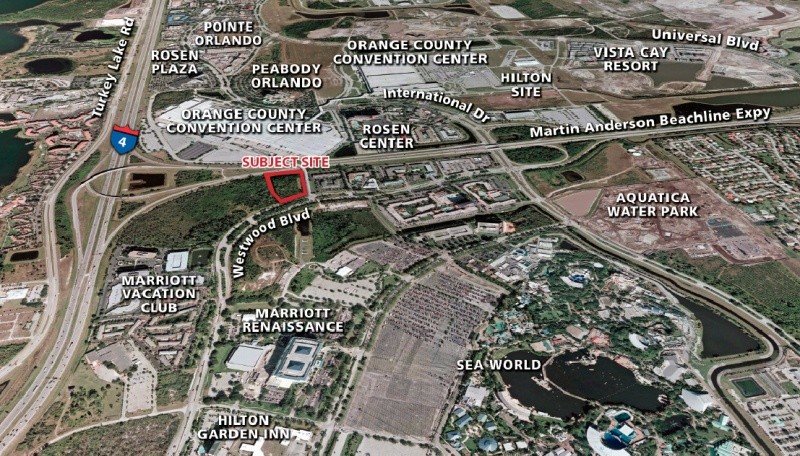 The tourist district has seen plenty of new growth, but there's one site that has long sat dormant. At the corner of the Beachline Expressway and I-4 sits an undeveloped 20-acre site that at one time was supposed to host a large observation wheel. While that project fell through (and the Orlando Eye ensured that it would never be revived), a new hotel project is in the works for the site.

The Orlando Sentinel reports that a 1,200-room high-end convention hotel is now in the works for the site on Westwood Boulevard. The site recently was sold for $11.5 million. Sitting directly across from the East-West section of the Orange County Convention Center, the site is one of the few remaining undeveloped parcels that's within walking distance of the convention center.

GrowthSpotter, the Orlando Sentinel's business journal, reports that the site might include two separately branded hotels. They're also reporting that the main hotel tower could be 40-50 stories tall. Currently, the tallest hotel tower in the tourist district is the 31-story Hyatt Regency just north of the Convention Center.

On the other end of I-Drive, we have a similar development currently preparing to break ground. The iSquare development will see two luxury hotels in a set of dual towers. Both projects look to attract higher-end clientele with numerous business-focused amenities.

No specifics on when the new Westwood Boulevard hotel project will break ground or open have been shared.