Barbara Poma says she struggled for months with the decision to sell the gay nightclub Pulse to the City of Orlando. Over the Thanksgiving break, she decided she couldn't walk away from the site where 49 people were killed and more than 50 were injured on June 12. 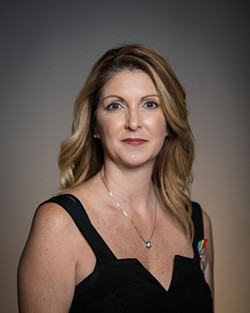 "You couldn't really put a price on it for me," she says at a news conference. "Everyone has their opinion and their feelings, but for me it wasn't about the real estate or the appraisal— it was about the emotion and what happened here...It was a hard decision for me to make because I was going with my heart. That's what Pulse has always been for me."

Poma announced Monday that she wouldn't sell the club to the city for $2.25 million, a negotiation which city staff had finalized early in November. The city's plan was to eventually create a memorial to the victims and survivors of the shooting.

But at the Orlando City Council meeting on Nov. 14, Mayor Buddy Dyer delayed a vote from Orlando commissioners on the purchase because of resistance from some on the council regarding the price. City records show the 4,500-square-foot building on a third-of-an-acre parcel had been independently appraised by the city before the tragedy and valued at $1.68 million. That’s about a $570,000 difference.

At an awkward meeting with Dyer last week at City Hall, Commissioner Tony Ortiz cited that difference as his only reason for opposing the purchase.

"I don’t have a problem with us getting the property," he says in measured tones. "I never said that I was against that. I do have an ethical and moral problem, and many people have expressed the same, in terms of the price. Why is this guy trying to capitalize on this?"

The initial asking price from the club’s owners was closer to $4 million, which city staff had negotiated to lower considerably, Ortiz acknowledged.

Commissioner Patty Sheehan, the city’s first openly gay commissioner, was frustrated the deal had fallen through. She says Poma called her in the morning before the news was released to let her know first.

"I don’t want to speak for her by any means but you know she was very upset by some of the things that were said, and I don’t blame her because I thought they were mean," Sheehan says. "I called them out at the time. I do not think she’s trying to profit from this. They had business losses. I did not think they were trying to take advantage of anybody."

Sheehan says city commissioners have never had a problem paying above value for other properties, so she doesn’t understand why they had a problem with Pulse. After Dyer first pulled the item from the council meeting in November, Sheehan says people have offered donations for the purchase of the club, and she even offered to start a fundraiser. Dyer’s office told her to not worry about the money, and that he had enough votes to get it passed. In a statement released after Poma's decision, Dyer's office says it "respects their decision" and hopes Pulse "will continue to be a place of hope and healing that honors the victims."

"All of the options that I presented to try to get this moving forward in a positive direction were hijacked by people saying unkind things and creating division instead of unity in our community," Sheehan says. "I’m distressed by that. We were Orlando United. We showed the world how to work together and then some small-minded thinking, has managed to throw a wrench in this."

Sheehan says she cautioned Poma that managing a memorial site can be a tremendous burden to take on as an individual, but she's confident Poma will do the right thing.

"She'll figure it out," Sheehan says. "I’m not going to say anything bad about Barbara Poma because she’s a good person and she didn’t deserve the treatment by some of my colleagues that she got."

Poma and her husband Rosario Poma opened the club in honor of her brother, John, who died of AIDS in 1991. The name "Pulse" is a reference to her brother's heartbeat and the way he continued to inspire his family and friends.

Poma says she isn't sure yet about what the future of Pulse looks like, but they are going to start working on plans now.

"All the families and the communities, the people who come to Orlando [and] the people who live here will still come to pay their respects and will come here to heal," she says. "I intend for all of those people to have input and to help us develop this together, because it truly is their space. It's not just mine now."