Former Goofy at Disney World for 20 years: 'Why would you let me hold your baby?' 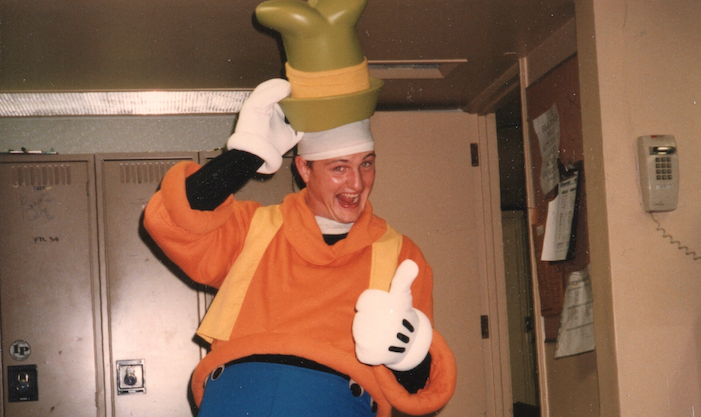 A former castmember at Walt Disney World, who played Goofy for over 20 years, participated in a Reddit AMA (Ask Me Anything) this morning.

The former Goofy discusses everything from rude princesses, dumb guests and of course, working for the Disney machine.

You can read the full thing here, which I highly recommend you do, however here are some of the highlights:

Best customer experience you ever had?
One that stands out is when I was working at Mickey's Character Spot at Epcot. There was an older gentleman that came up in the queue but didn't come see me, he just sort of stood in the back and watched me for a while. After about 20 minutes he came up to me and said "Goofy, I had a special friend that would want you to have this." In Goofy you have to look down in order to make it look like Goofy is looking at you so I couldn't see him but I heard him holding back the tears. He was shaking a bit but he gave me a hug anyway. I will never forget that hug. It was one of those hugs that last with you. He was crying in my arms. He had given me this which is a pin they give to family members or friends of POWs and MIAs. It's become one of my most prized possessions.

Worst customer experience you ever had?
Ugh. Worst guest experience? It's a tie between having my life threatened at a Grad Night party one time and one time I had to tell a guest that their son was in jail for stealing from one of the stores and she did not take it very well.

Why did you quit?
I was fired. To make a complicated story short, Donald Duck was, as usual, being a jerk and wouldn't leave my area because I had signed "Luv, Goofy" right over the bill of a Donald Duck hat. He threw a temper tantrum and as I was dragging him across the floor to get him back to his position a little kid ran out from behind the curtain at Pete's Silly Sideshow and we knocked her on her butt. The kid was fine and no one complained but Disney didn't really appreciate me dragging the costume on the carpeted floor so they terminated me.

Ever bang someone in the costume?
No, and contrary to popular belief there aren't many furries in the character department. I know there are a few (I knew one of them) but it's not something that's out in the open for sure.

What were your coworkers like? Is everyone filled with the Disney spirit, or do people hate their jobs there like any other job?
It's really like any other job. I went through phases myself. At first, every time I farted Pixie Dust ® would blow out of my butt but after several years I got kind of bitter. It was all management stuff though. On set I was fine and loved it but backstage stress got to me for a while and I was big on holding Disney accountable. After about 10 years though I calmed down. I loved every single minute while on set (for the most part) and some of my co-workers will be friends for life. You get out of it what you put into it.

What is the weirdest request that a visitor ever asked you to do?
A guy once asked me to choke him for a picture (I didn't). That's a hard one because guests routinely do stupid weird things. I think the worst of them is when people bring their newborn infants to the parks and ask us to hold them for a picture. I can't see shit in Goofy let alone other costumes and I'm wearing giant gloves or paws or whatever depending on what character I am. Why would you let me hold your baby? Yeesh!

What is your favorite memory working there?
I can't really figure that out. I've tried to answer that question a hundred times but I can never pinpoint a specific moment that stands out from the rest. I have a few tear jerkers, a few laugh out loud moments, and a few horror stories. One that does stand out was at Give Kids The World which is where all the Make-a-Wish kids stay when they come to Disney (truly a magical spectacular place). A woman came up with her son who was born with a birth defect that meant he had no muscles in his neck. He looked REALLY bad and his head had to be supported by his mom. This was a special circumstance. The kid's wish was to be held by Goofy. That's it. Just to be held. The mother told me that because of his "life problems" everyone is afraid to even touch him. She laid him very carefully in my arms (sitting on the ground) and let go. We rocked back and forth on that floor for what seemed forever. It was one of the times where I forgot I had the costume on and I just cried and cried. He was such a special kid. I'll never forget that.


Are the Disney Corporation really as cold-heartedly capitalist as the adult me has been lead to believe?
I can give you an example of how corporate Disney has taken over what I like to call Traditional Disney. The place where all of the characters used to break was called the Zoo. Everyone knew the characters as The Zoo Crew. If you wanted a character you either called the head room or the Zoo. It was a Disney tradition and everyone got a kick out of it. Then this guy named David (who was the Entertainment Vice President) came in and didn't think that sounded too professional so he changed the name to the Base. Eventually all the Zoo signs came down and were replaced. The Zoo disappeared and it got sterile really quick. We used to have nice big couches to relax on and David had them all thrown out and replaced by metal chairs. A part of the character department died that day. Anyway, they're way too concerned with "numbers" now. We used to just stroll the parks and play with people but in the end we were all held accountable to see as many guests as we possibly could during our sets. They HOUND you to go faster and faster. They figure 23 seconds (a number I pulled out of my butt mind you but I know it's under 30) is plenty of time to see a family of 4. I turned into an autograph machine towards the end but I always stayed true to my character. A lot of performers don't do that anymore. It's sad.

Are the stereotypes about people who play different characters true?
If you're talking about the "face" performers the answer is yes and no. Some of the break rooms are like the high school cafeteria where the "cool" princesses (elsa and anna) sit on one side and make eyes at the "old" characters (snow and poppins). It's really childish. Other face performers think they're on Broadway and demand respect and they hate not getting it. But those are extreme cases of a few bitches. For the most part the face performers are as much a character as any of us. Some of them are the sweetest people I've ever met in my life.