Art guerrillas Time Waste Management and left-field dance cabal TMD – two of the most idealistic and forward groups in the city right now – have pooled their energy and vision to launch Counterweight (Dec. 15, Audubon Park Covenant Church), a series that merges ambient sounds and video art in alternative settings. 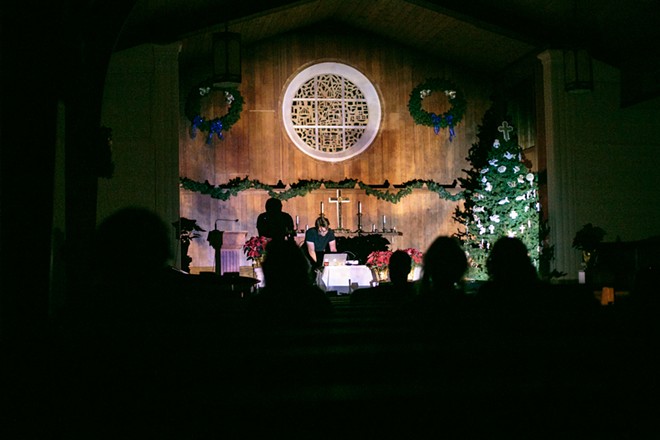 Officially setting the sail was Temperament, a drone project by Glenn Ritchey of local noise-metal band Ad Nauseum. His grim set unfurled with elemental patience, like a soundtrack that suddenly makes you feel the mass tectonic creep happening beneath your feet. It was a slow rise that began in the primordial ooze, emerged into a prehistoric mammoth plod and then voyaged out into a storm of disintegration.

Capping the night was Ubik, a project by Fortune Howl brain Bryce Linde. Unlike his main gig, this is an even more abstract concept whose experimental DNA is woven with the strains of ambient music and found sound. It’s capricious, suspended in wonder and would definitely be right at home on Illuminated Paths.

But with all due respect to ambient music, there’s a reason it’s called such. That’s why it was a critical stroke by the event conceivers to include a visual aspect in the proceedings. These kinds of sounds allow visuals to be not just a backdrop but an integrated and activating force, like it was with the work of Orlando film artist Kate Shults. Her video projections – spanning the entire chancel wall – were the only light in the otherwise unlit space. It was kinetic impressionism whose undulations gave optical life to the sonic movements happening. 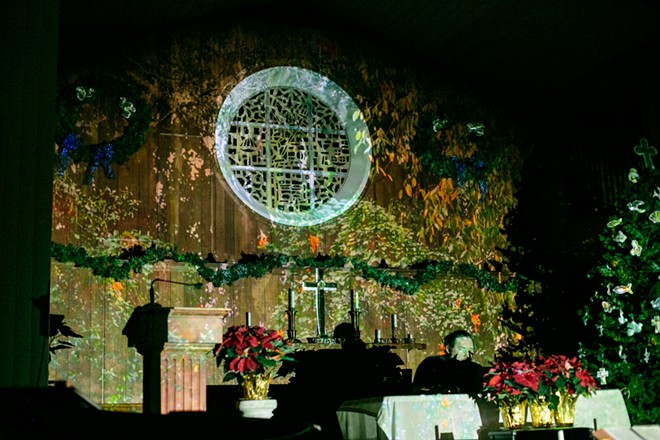 Besides these active human forces, however, there was one other key element at play: the setting. In this case, it was a church, and it proved a defining factor. Alive with an underground pulse, under the nighttime spell of art like this, it exuded extraordinary presence. Everything culminated, effectively and transportingly. Although not religious per se, this event was very much ceremonial.

Though many didn’t arrive until the second act (you can take the kids out of the scene but you can’t take the scene out of the kids), the turnout ended up very respectable, filling up the church about halfway. It’s always great to see people trying to present interesting things, but that’s only half the formula for sustainability. So it’s just as invigorating and meaningful to see a thirst for it like there was on this night.

With such a compelling premiere, this multi-disciplinary affair is a series worth watching. It’s the most ambitious musical art campaign to contend in a long time. This is next-level DIY that’s beyond the garage. If Time Waste Management and TMD can make it a thing, Orlando will have a very fresh new horizon.