Why Florida Is Loud Fest needs to be a recurring thing

What a week it’s been for Orlando musician Glenn Ritchey. First, the guy helps launch Counterweight, the ambitious new collaborative audiovisual art series by Time Waste Management and TMD, with an evocative performance of his solo drone vehicle Temperament. Then, only 48 hours later, he debuts his own behemoth baby, the Florida Is Loud Fest (Dec 16-18, Uncle Lou’s and Will’s Pub). 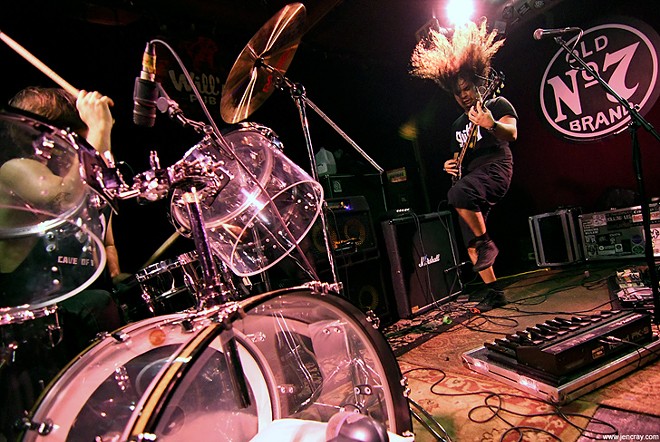 The festival – the biggest, most notable heavy-music congress in a long time – is a fiercely DIY affair that’s proof of the depth of community in the underground. Its focus is on Florida acts, which is a deep enough pool when it comes to metal and punk. But its reach radiated beyond. The apex night right in the middle the festival (Dec. 17, Will’s Pub), for example, summoned a notable national name like Nashville’s Yautja, who’ve forged alliances through their frequent tours through here, and the homecoming of beloved, formerly local hardcore crew Knife Hits.

I arrived in time to catch only the tail end of the set by St. Pete’s Weltesser but the damage and infatuation is likely permanent. It doesn’t require a half-hour to absorb, process and appreciate a nuclear roar like this. It’s one of the most overwhelming detonations of sludge and doom around, and I will not be late for their next Orlando stop.

Collectively, Knife Hits brought some impressive torque and velocity to a bill heavy on the heavy. Individually, it was nice seeing the faces of these Orlando expats around the bar again.

And Miami duo Holly Hunt reminded again that they own some of the most distilled and monolithic sludge in the game right now.

Hopefully, the clear fellowship that permeated the proceedings and the crowds like the one that packed out Will’s Pub will impel the Florida Is Loud Fest to be a recurring thing because there hasn’t been a concentration of talent as big, heavy and good as this here in years. Good vibes, maximum tonnage, unholy volume.