'Best and Brightest' bonuses for Florida teachers could face changes 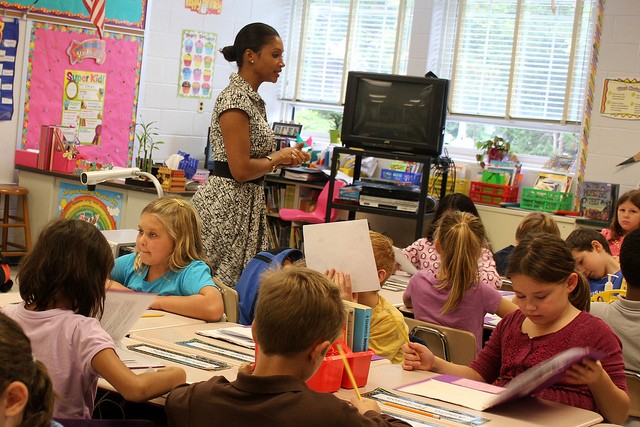 The controversial "Best and Brightest" bonus program for Florida teachers could be headed for changes in the upcoming legislative session, though the dimensions of those revisions are still murky.

Gov. Rick Scott has signaled that he will propose a different way to attract and keep high-quality teachers in the state's public schools.

House leaders, the current program's strongest backers, have indicated they are open to some changes. And at least some members of the Senate, which has resisted Best and Brightest's reliance on teachers' test scores in awarding bonuses, appear to be interested in taking another run at overhauling the program.

Adding to the questions about the program: The author of Best and Brightest, former House Education Appropriations Chairman Erik Fresen, and one of its chief critics, former Senate Education PreK-12 Chairman John Legg, are no longer in the Legislature.

"Just strap on your seat belt for that (discussion), because it will be an interesting journey," said Sen. David Simmons, an Altamonte Springs Republican who chairs the Senate's public-schools budget panel, at a recent committee meeting.

The chief complaint about Best and Brightest is its reliance on teachers' scores on college admissions tests. Under Best and Brightest, first approved by lawmakers in 2015, teachers who are highly rated and scored in the top fifth of the test results on the SAT or ACT, are eligible for bonuses of up to $10,000.

But critics say using exams like the SAT and the ACT is unfair to older teachers, whose scores are decades old or who don't have ready access to the information. The state's largest teachers union, the Florida Education Association, filed a complaint in 2015 with the U.S. Equal Employment Opportunity Commission claiming the program discriminates on the basis of age and race.

The Florida Board of Education has approved a budget plan that would do away with the program, which received $49 million in the budget year that runs until June 30. Lawmakers will start their annual session in March and will approve a budget for the fiscal year that starts July 1.

Under the Board of Education plan, the Florida Department of Education would create a $43 million program that would "support bonuses for new teachers who show great potential for and veteran teachers who have demonstrated the highest student academic growth among their peers," according to a summary of the proposal.

Education Commissioner Pam Stewart has not unveiled a more detailed version of the plan, and Scott has not gone into detail about his recommendations for education spending next budget year.

However, talking to reporters after a meeting of teachers of the year in October, the governor indicated he was listening to educators' complaints about the bonuses and would support the board's ideas.

"What I'll be putting in the budget is $43 million for a program that retains and recruits teachers," Scott said. "Now, we're going to continue to get advice, get counsel, get ideas from all these teachers, because if you think about who's going to know the best how to do it, it's going to be them. They know how they were recruited. They knew why they're doing what they're doing."

House leaders have signaled a willingness to alter the program— to an extent. Education Chairman Michael Bileca, R-Miami, said recently that the House might be willing to open up the program.

"We have heard the feedback in terms of, it should be based on this or that, and I think we are going to look at how do we make it more expansive," Bileca said. "Because the end goal is having the best possible teachers in the classroom. I don't think that excludes, though, other avenues on how do we attract the best possible teachers in the classroom."

At the same time, House leaders continue to point to studies indicating teachers who did well on the SAT and ACT also perform better in the classroom.

Speaker Richard Corcoran, R-Land O' Lakes, indicated that the changes the House would consider might include, for example, lowering the bar for at least some teachers to qualify for the awards. A bill filed last year by Legg would have allowed veteran teachers who scored in the top 40 percent of test-takers to claim the bonuses.

"We could probably lower it down," Corcoran said. "As much as the Senate screamed and hollered —- or at least, one or two of them did —- they passed a version of it. So obviously, they believe in it too. All we're doing now is arguing over lines."

But in his remarks this month, Simmons hinted there might be broader changes.

"I think that there are things that we can (do to) accomplish what the House wants to accomplish and at the same time be able to reduce the criticism that might exist as to the methodology in rewarding these teachers for the hard work that they're doing," he told reporters. "It breaks my heart when I see teachers having to work in the evening just to make ends meet. We've got to improve teacher compensation."

Simmons floated the possibility of expanding the number of teachers who are eligible for the award, or introducing a graduated scale for teachers.

Senate President Joe Negron, R-Stuart, was guarded about what changes might be in the offing.

"I can't predict how it's all going to unfold ahead of time, but I know that it's important to the House to have additional compensation for highly qualified teachers. For me, that's the issue," Negron said. "How to do it and what the best mechanism is, that's why we have the session— to determine that."