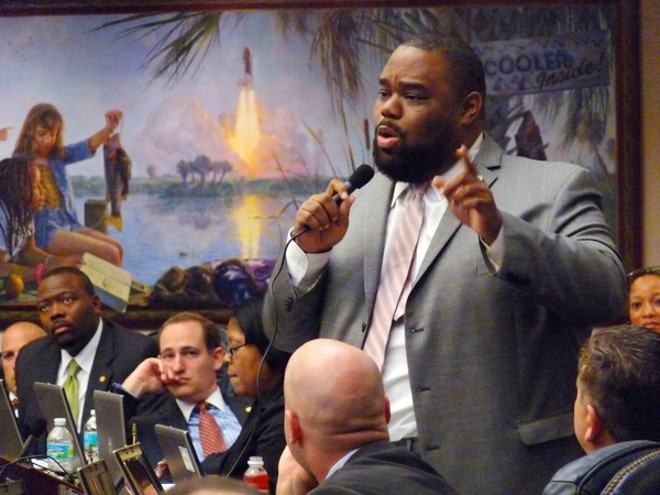 The race for the chairmanship of the Florida Democratic Party has evolved into a multi-candidate contest as Democrats continue to maneuver before the vote next month in Orlando.

In the latest development, former state Sen. Dwight Bullard has moved from Miami-Dade County to rural Gadsden County to keep his bid alive.

Bullard appeared to be out of the race to replace Allison Tant, the outgoing chair, when he lost an election for a Miami-Dade state committeeman post to Stephen Bittel, another candidate for the party's chairmanship, earlier this month.

But Bullard has re-emerged in Gadsden, a rural enclave near Tallahassee, and was unanimously elected as the county's state committeeman on Tuesday, replacing Sam Palmer who agreed to step aside, said Willie Neal, the Gadsden County Democratic chairman. Neal said Gadsden Democrats were happy to give Bullard "an opportunity to run" for the party chair.

In an interview with The News Service of Florida last month, Bullard said his candidacy for the state chair would emphasize "a recommitment to our grassroots political ideology, putting everyday working families before special interests."

"People want to know there is a party out there working for them and that it represents their voices," Bullard said.

As Bullard revived his candidacy, Bittel, who is a Coconut Grove developer and major party fundraiser, formally announced his bid, saying the party "needs a new direction, a change in strategy and a clear message."

Bittel promised to work with all 67 counties, looking to build "a permanent progressive infrastructure" to help Democrats in future elections, including 2018, when the governor's office, three Cabinet seats and U.S. Sen. Bill Nelson's re-election are at stake.

"We need to expand beyond Tallahassee and get on the road to engage working Floridians from Pensacola to Key West," Bittel said.

Bullard's move to Gadsden mimics an earlier maneuver by Alan Clendenin, another party chairman candidate, who lost a bid for a state committeeman post in Hillsborough County but won election to a similar party position in Bradford County to keep his candidacy alive.

Rachel Pienta, a former Wakulla County committeewoman and longtime party activist, said she is supporting Clendenin as a candidate who can unite the party after another disappointing election year.

She said Clendenin exhibited his ability to be a unifier after he lost a close election for the party chairmanship to Tant in 2013.

Pienta said Clendenin also has the ability to build the party base "beyond the blue bubbles in the state where we have really concentrated so much of our resources to the neglect of the outlying rural counties."

"I see Alan looking at the big picture," she said.

Pienta said there are at least two other Democratic leaders positioning themselves for a possible party chair bid, including Leah Carius of Osceola County and Lisa King of Duval County.

Asked about how the aggressive maneuvering may be impacting the party, Pienta said it's a positive that so many people are interested in the race, while acknowledging they "have to jump through crazy loops and follow old rules."

She said the chair fight could prompt a move to not limit the candidates to county committee posts in future races.

"I think opening the field does make sense. It would take away some of the backroom politics," Pienta said.

"That said, the rules currently prescribe that's the way to get it done," she said. "And if people play within those rules, I don't have a problem with it."

Party activists will gather Jan. 14 in Orlando to elect the new chair. More than 1,000 votes are expected to be at stake, with the larger Democratic counties, such as Broward and Miami-Dade, having more influence in the weighted vote.