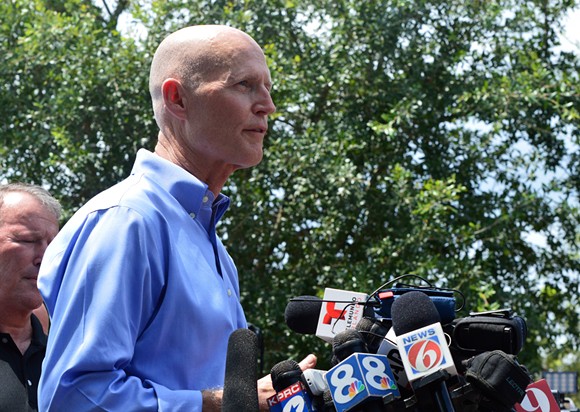 The Associated Press reports Scott will ask the Florida Legislature for more money in the annual budget to hire agents that will be placed in seven regions of the state managed by the Florida Department of Law Enforcement. During the shooting, the gunman, Omar Mateen, pledged allegiance several times to ISIS during 911 conversations with police, though U.S. officials have pointed out that there's no "immediate evidence" showing a direct link between Mateen and the militant group, according to Reuters.

At a press conference in Orlando on Wednesday, Scott says he's personally going to do everything he can to fight acts of terror like the Pulse massacre.

"Unfortunately last year, Florida came under attack," Scott says. "A terrorist, inspired by ISIS and filled with hate, stormed into Pulse nightclub here in Orlando and killed 49 innocent people. This act of terrorism was an attempt to rip at the seams of our society, to divide us and to instill fear in our communities. It was an attack on our gay community, our Hispanic community, Orlando, the state of Florida and the United States of America."

"With the positions, FDLE will create eight counterterrorism squads statewide whose sole focus will be to improve the gathering of Florida's terror-related intelligence and to investigate terror-related crimes," Swearingen says at the press conference. "As the threats to our nation increase, FDLE is ready to move to the next level, and these counterterrorism squads will ensure we can accomplish our goals."

Scott adds that he saw firsthand the devastation that came after the attack because he attended funerals of the victims and visited survivors in the hospital.

"No family should go through what so many experienced after the attack on the Pulse nightclub," he says. "We will do everything in our power to make sure this never happens again. By investing in our state's counterterrorism efforts, our law enforcement officers will have the resources they need to curb this senseless violence."