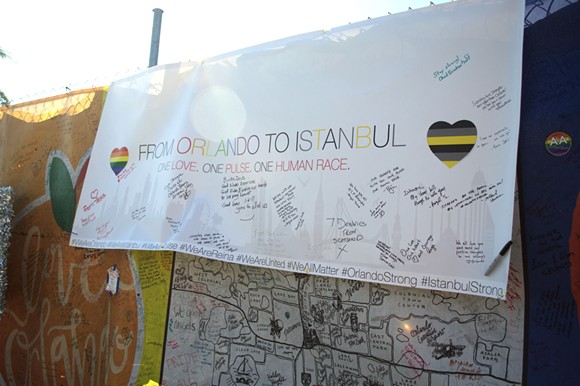 Pulse survivor Brandon Wolf hopes to send a token of love to the victims of the New Year's terror attack by a gunman inside Reina, a popular nightclub in Istanbul.

Wolf says hearing that 39 victims had been killed in the shooting and dozens were injured in Turkey brought him back to June 12, when a gunman opened fire at the gay nightclub Pulse in Orlando and killed 49 victims, including two of Wolf's friends. Wolf, who managed to escape, worked with his friend Michael Vacirca to design and put up a banner at the Pulse site for people to write messages of love and hope to the people suffering in Istanbul.

"I absolutely felt alone, but I got love and compassion from around the world," he says. "I felt that for months afterward, and I knew I had to do something like that. If I could do nothing else, I had to send a message to people that are hurting that we're here of you. We might be thousands of miles away, we might not even speak the same language but we're here for you."

Angel Santiago Jr. says it was important for him to sign the banner and show his support to Istanbul victims because of the love people showed him after he injured during the Pulse shooting.

"The support we received as a community from everyone around the world helped me get through what happened," Santiago says. "Of course, your family and friends are going to support you, but to get messages from people you don't even know and aren't even in this country that show their support and tell you to stay strong, you can't put a dollar sign on that. For us to be able to do the same thing, it's great. We're giving back the same way people gave to us."

Wolf says he will leave the banner up for two weeks so the Orlando community can get a change to sign it before he sends it to Turkey.