A mandatory contract at a Florida pho eatery is forcing employees to pay fees for things like not saying "hi" or "bye" to costumers.

During a recent employee meeting, Saigon Bistro, located in Lakeland, Florida, reportedly asked its employees to sign a contract saying they would pay real money for not doing their jobs up to par.

As you can see in the image above, which is currently making the rounds on the internet, punishable actions range from an understandable phone usage policy to the brow raising restaurant-wide ordinance concerning straws.

This policy, humorous to some and offensive to others, punishes employees for failing to withhold beverage experience assistants, or straws, from the men who come into the restaurant. That is correct, no straws for men as society has deemed them capable of a strawless life.

Despite the presence of this out of place addition, the rest of the contract finds itself within the realm of acceptable. Stopping the eternal checking of a pocketed phone is good practice for a successful business and should not be viewed as a red flag of employee mistreatment.

That being said, one staff member, Kristina Russel, decided to go her separate way from Saigon Bistro. According to WFLA, when asked to sign it, Russel felt unable to do so, and while raising her objections was told by the owner, "well, you don't work here anymore."

Objections have been raised over whether or not it was a firing or a quitting.
Regardless, current employees of the restaurant have stood up in support of owner Kim Huynh and have further pushed the reasonable line of thought that says this is a good counter to employees lacking serious work ethic and merit.

Kristina has found a plethora of support from social media advocates on social media. However, some people have also slammed the Saigon Bistro's Facebook page with suggestions and lectures ... 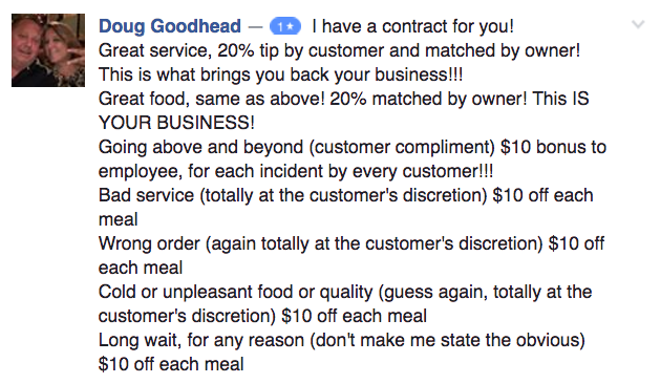