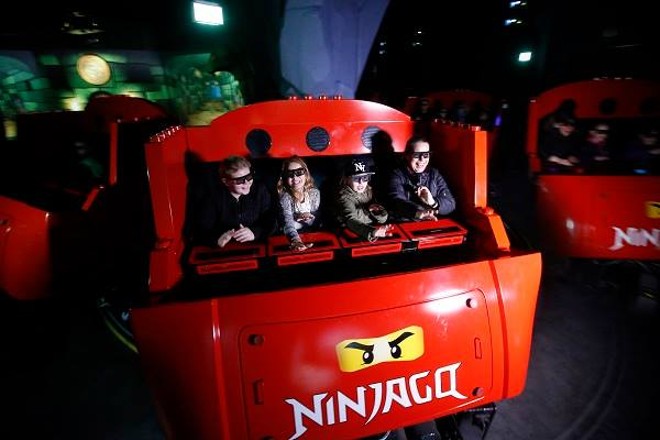 Legoland Florida has been busy since opening roughly five and half years ago with new rides and areas coming online every couple of years.

On Thursday, Jan. 12, their newest land – the fourth major one since the park opened (others include Chima, Duplo, and Heartlake City) – will debut with one of the most technologically advanced rides in the park.

The central feature is Lego Ninjago the Ride, a 4D ride that uses wireless technology allowing for guest’s body movements to interact with the screens. The ride is similar to Disney’s Toy Story Mania, but instead of handheld devices that shoot at the screen, guests can use their hands.

The ride, designed by Triotech, uses state-of-the-art technology that tracks guests' hand gestures, similar to an Xbox Kinect.There are five distinct movements, based on Ninja moves from the Ninjago television series, that guests will use throughout the ride. Different-colored "power orbs" help riders see what they’re doing on the screen. The final scene of the ride involves all eight riders working together to defeat The Great Devourer, a giant serpent from the television and Lego series, which will be projected on the walls of the final room using state-of-the-art projection mapping technology. A mix of different physical effects, including fog, lighting effects and wind, helps enhance the mostly screen-based attraction.

Interactive Ninjago rides have already opened at other Legolands, including in California, but the Florida version is larger and more detailed.

Other activities in the new land include a small rock-climbing area, a light up whack-a-mole style game similar to the Light Wall found in Winter Park’s Shady Park, a Lego building area and other playground-style equipment.

This is the second interactive shooter style ride for Legoland Florida and the first themed to Ninjago. The new land, including the playground areas, opens Thursday, Jan. 12.